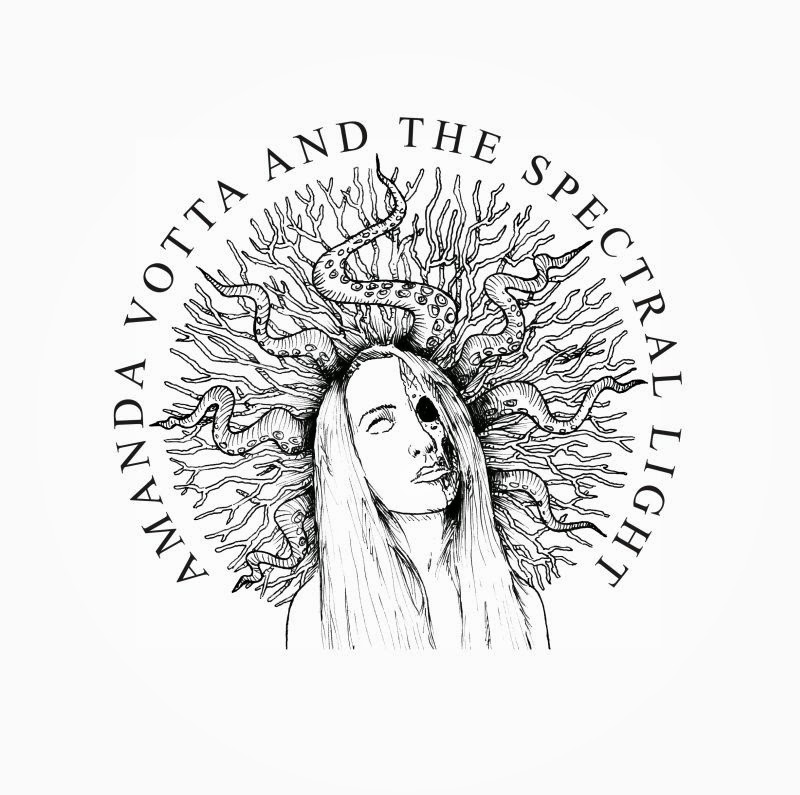 Anyone familiar with the work of The Floating World, The Hare and the Moon, and The Great Attractor will be well aware of how formidable the talents showcased by this new recording are. And yet, on "Secrets to the Sea", Amanda Votta (vox, lyrics, slide baritone guitar), Grey Malkin (guitar, atmospherics), and Neddal Ayed (songwriting, guitars), strike out in entirely new directions, delivering an utterly compelling album, beneath the opulent beauty of whose surface lies a penumbral, elegiac complexity. From the opening, crepuscular drone of "Black Doom", to "Feathers and Goodbones" valedictory cymbal stroke, the listener is held in a strange, liminal, volatile aural space, where ghostly swirls of feedback drift and mingle with clouds of strange atmospherics.

"Black Doom" launches into a coruscating guitar drone, reminiscent of Neil Young’s "Arc Weld", and recalling the lush pastures of distortion that characterized The Jesus and Mary Chain. This track however, has a quite singular identity, as Votta’s voice emerges, like a cold pearl in the fog, and vanishes beneath an exquisite sea of echoing guitars. "This is How They’ll Find You" is ghostly and intimate, featuring an old-timey parlour guitar being strummed against a backdrop of gauzy atmospherics. Votta’s breathy, child-like voice finds its counterpoint in a male whisper that transforms into a menacing baritone. "The Shepherdess and the Witch" is built upon an intermittent, arrhythmic bass drum around which stacks of harmony topple and gloriously spill. Votta’s voice surfaces, evincing shades of Liz Frazer and Kate Bush, and is carried along by the song’s strange, halting pulse. "Dream at Daybreak", for me the highlight of the album, is a master-class in slide guitar, with Ayed’s echo-soaked tones transporting this listener to a place somewhere in the orbit of Pink Floyd’s "The Narrow Way", "Garlands"-era Cocteau Twins, and mid eighties Nick Cave. Again, though, these musicians fuse their individual voices so seamlessly and organically that what emerges seems newly minted. "Moonflowers" inhabits darker sonic territory, with deep, phased guitar tones roiling and revolving like a black mist. The vocals here are composed of long, evanescent susurrations, with an insistent little feedback pattern eerily recalling John Cale’s viola on "The Black Angel’s Death Song". "I Am the Moon" is underpinned by a simple drum machine dialed into a rigid march tempo  over which Votta delivers a spooky, off-kilter vocal, doubling with herself in a quietly obsessive colloquy. "Feathers and Goodbones" leads us to the album’s densest, darkest textures, its final clangs, strums, and eruptions once more recalling the psychedelic wilderness of early Velvets.

It’s fair to say that, compared to Votta and Grey, this album is somewhat closer in spirit to Ayed’s previous work, although, as with all successful collaborations, the fresh chemistry brings out new elements of his voice. Grey’s seminal work with The Hare and the Moon is quite removed from this album’s sound-world, and yet somehow his emotional sensibility is imprinted on the record. As for Votta, the album’s producer ---- and described by Grey as the “gatekeeper” of the project ---- her ability to balance delicacy, aggression, and subtle evocation, is a thing of wonder.

Don’t miss out on this album. It’s a haunted, beautiful record. Let’s hope these brilliant musicians get together again.

Last few copies of the CD available from Reverb Worship here - get in quick!