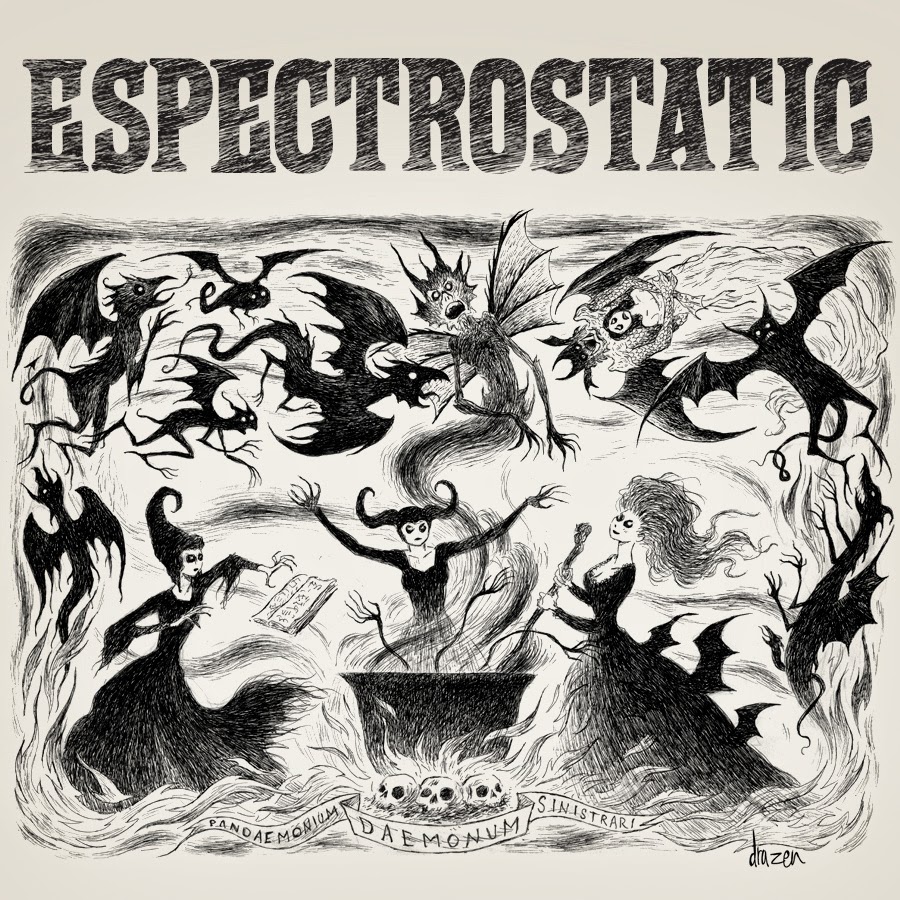 OK cheapskates, here's another batch of great new free releases for you, supported by the artists who created them, directly from their hearts to you.

Espectrostatic "The Daemonum EP"
Alex Cuervo seems to be permanently busy with his Espectrostatic alter-ego, which is always great news for those of us who appreciate horror movie sounds of a particular vintage. Alex has a new album proper "Escape From Witchtropolis" coming soon from Trouble in Mind Records, but in the meantime this fab little collection of bits and pieces has just popped up to keep us going.
Quite varied in sound, but unified in mood, it's a lovely grab-all of vintage stalk and slash sounds, with "Postcard from a Dead Colleague" boasting a suitably sinister, Lovecraftian throb, while the sequencers, and squelchy synths of "The 447" are relentlessly creepy.
Best of all is "The End of Lexie", which is particularly Autumnal and stalkerish, with a melancholy piano based melody which vividly captures the subtle, mounting paranoia of the very best films of the late seventies slasher golden age.
Available here:

Joel Jerome "Strawberry Fields Forever & Penny Lane"
Excellent psychedelic pop geezer Joel Jerome has just set up his own label, Psychedelic Thriftstore Recordings as an outlet for his considerable output. Following an album of his own songs which we'll tell you about in more detail shortly, the label's second release is planned as a "Sgt. Pepper" tribute album (due on the 28th of this month we're told), and preceding its release we have this double a-sided single (as the original single preceded the album I believe?).
Beatles covers are a dime a dozen, and frankly, usually a bit rubbish. The majority can't decide whether they want to stick to the originals exactly, or reinvent the originals by removing almost everything that created the original appeal in the first place. Jerome manages to tread the very narrow path between these two possibilities, with "Strawberry Fields" working particularly well, a swirling kaleidoscope of colourful "I am the Walrus" psychedelia that I'm sure John would have approved of (if he'd been asked in 1967 anyway).
Definitely looking forward to hearing more of this - grab this one quick, who knows what will happen to it when the full album comes out?

Delia Haunt "Marseille Trance // Hitomi"
Also offered as a taster from an upcoming album ("100 Years of Solipsism") is this two track debut from Texas based five-piece Delia Haunt. That's pretty much everything I know about these guys, but these first two tracks are extremely appealing pieces of lo-fi psychedelia that mix jangly psychedelia with quirky indie-pop structures. "Hitomi", on the other hand offers some great vintage synth-pop tones in support of its infectious falsetto vocal hooks, mixing genres and decades in the manner of Ariel Pink. Very good indeed.

And lastly, a bit of self promotion. I'm sure that many of you are aware of our monthly free samplers on Bandcamp? We also have our own label run through the same Bandcamp page which has a few freebies on it, then most recent of which is the debut full length from space / surf-rockers The Blue Giant Zeta Puppies. You can also grab the NoMen's entry in the Active Listener Introduces series, and a label sampler for free.