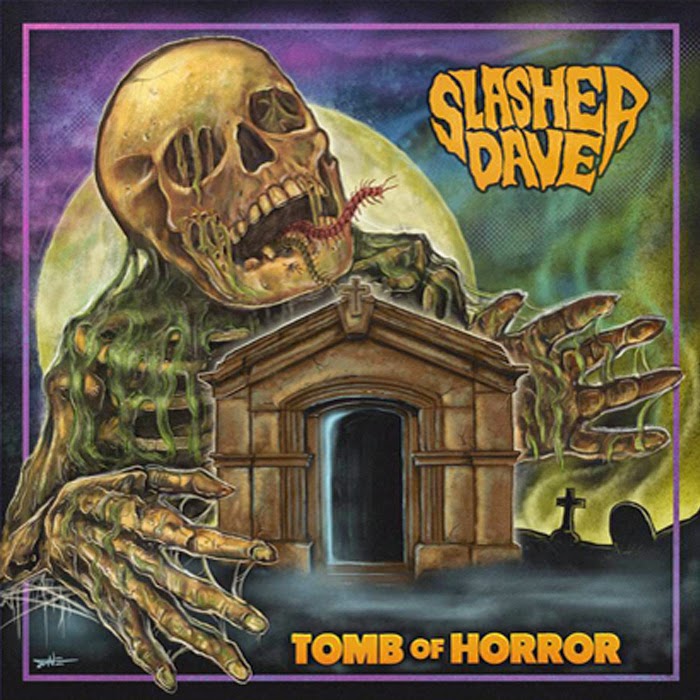 Musician and artist Slasher Dave makes it pretty clear with his name where his allegiances lie, and one listen to his excellent John Carpenter homage debut "Spookhouse" backed this up even further.

And while his sleeve art for for the brand new album "Tomb of Horror" may seem to indicate some sort of mid eighties slasher / thrash metal hybrid, Dave has here turned his attentions towards late seventies / early eighties Italian zombie films, with the music of Fabio Frizzi (whom this is dedicated too) proving particularly influential.

The Frizzi worship shines through most obviously, with excellent use of slow programmed drums and that creepy ass choral synth sound that Frizzi used so well, but there are also moments that recall the delicacy of Goblin's "Suspiria", utilising light and shade extremely effectively.

Slasher Dave doesn't belong to this new school of Italian disco / horror synth spearheaded by the likes of Umberto. He's the real, vintage deal, with not one incongruous note on "Tomb of Horror". If someone was to drop this in your lap and tell you that it had been recorded in 1981, there's nothing out of place that would clue you in to its much more recent vintage. And while this dogged approach to retroism does draw criticism in some (but certainly not these) quarters, it's worth noting that the original soundtracks of this era were often quickly thrown together, with several themes revisited often to make up incidental music cues. Compare this to "Tomb of Horror"s 13 succinctly different tracks - each melodically approached as if it was a separate theme - and it's like you've not only discovered a new Frizzi or Simonetti, but you've also got a ready made highlights package of the most memorable themes from ten years worth of their soundtracks. Whether it's original or not is entirely missing the point, especially when it's done this well.

"Tomb of Horror" can be pre-ordered on CD here for a discounted price for the next few days, and is available now on vinyl here.

Digital is available through the streaming link below.