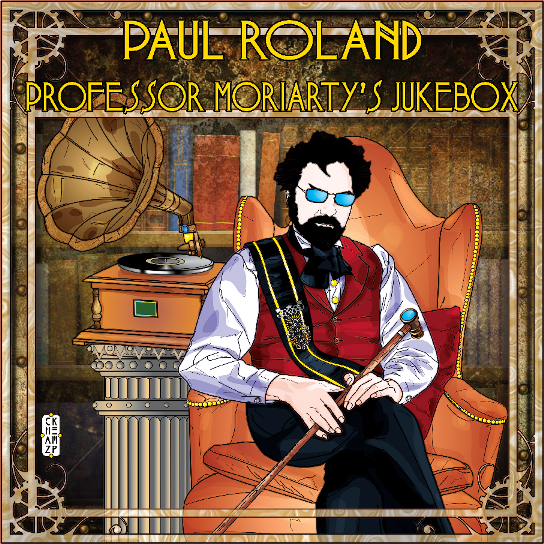 Reviewed by Grey Malkin (The Hare & the Moon)
www.sireena.de
http://www.paulroland.de/

Paul Roland has been at the forefront of the British psychedelic music scene ever since his first release "The Werewolf of London" over thirty years ago. Spanning every corner of his dark imagination, his albums have ranged from chamber baroque ("Cabinet of Curiosities") to soundtracks ("Hexan") to blistering full on psych rock ("Duel"), often covering every conceivable element in between. Yet all bear the hallmark of his distinctive vocal, his creative and fertile (and sometimes downright macabre) sensibilities. His most recent release "Professor Moriarty's Jukebox" is a gothically ornate psychedelic jewellery box into which Roland, ever the alchemist, breathes in folk and steampunk and exhales perfect psych pop treasure. The tale behind this release starts with Roland being invited to perform at an event curated by comedian Stephen Fry and subsequently putting together a live band that sounded so effective he took the opportunity to record some of the set in the studio for a radio broadcast. This then grew into said "Jukebox", the first in proposed series of such curios. Bookended by various outtakes, further radio sessions, alternate versions and rarities this is a unique and unusual, yet essential volume in the musical story that is Paul Roland.

Covering various past classics in a distinctly updated and radically different style, the band incorporate a barnstorming approach to some Roland nuggets and a delicate, graceful touch to others. "Re-Animator" benefits from wild, swirling violin whilst "The Crimes of Dr Cream" (from "Duel") is given a fuller, psych rock makeover, albeit with lavish strings and a considerate touch. A reworking of "I Was Teenage Zombie" (from one of Paul’s most recent opuses, "Bates Motel") is a blitzkrieg of buzzing guitar and sinister intent. "Captain Nemo" (Roland's songs are extremely literate and often reflect on various notorious characters from British literature, history and folklore) is a beautiful string drenched version of the original, Roland's acute sense of melancholy coming to the fore. "Alastair Crowley" is propelled by strident bass and discordant guitar, a rougher ruby than its album counterpart though still with those glorious string arrangements. "The Puppet Master", an early Roland classic from the "Burnt Orchids" album, creeps clockwork-like in the shadows of acoustic guitar and an ominous chanted chorus. Roland's forte is articulating wyrd, twisted tales of terror and eccentricity into song and this track stands as a perfect example of his originality, disturbed subject matter and utterly melodic and memorable songsmithery. "Tortured by the Daughter of Fu Manchu" is a garage rock gem, a howl of wailing guitar with a palpable sense of the ghost of Bolan looking over its shoulder. "The Hanging Judge", another early Roland favourite, is given a cabaret, almost Brel-like stomp to exhilarating effect. These aren't so much re-done versions of earlier songs as completely re-thought and retold; it is a triumph indeed to improve on the originals and some of these versions narrowly do so with their sheer sense of energy and vigour. "Nosferatu" is a hushed, dust laden, dark attic of a song, ably orchestrated and given the appropriate sense of dread by the mournful violin and Roland's distinctive vocals.

These tracks alone would be perfectly wrapped gift for the Roland obsessive, or even the curious and unintiated. However the album is also appended with several rarities and alternative versions of Roland originals and cover versions. His take on Bolan's "Meadows of the Sea" is an explosive, wailing scream of a song, dipping into perfect harmony for the chorus. It is at once breathtaking and hugely exciting. Roland's versions of two Kinks (or Dave Davies and The Kinks) classics "I'm Not Like Everybody Else" and "Death of a Clown" are similarly expertly interpreted. Having covered the former to great effect on his covers album ("Strychnine") this track has become a Roland standard, its flute and baroque arrangements suiting the gloom and polite threat of the song perfectly. The latter, an outtake from the "Sarabande" album sessions, is a wistful and melancholy interpretation which fully establishes the mournful English whimsy suggested at in the song’s original version. Weeping violin adds a late night barroom feel, last orders are called and the protagonist is left alone once more to wander into the lonely and cold foggy evening. An unreleased version of "Fairies" is a revelation and is pure Roland; English to its very core and oozing Victoriana, it's tale of the Cottingley Fairies is both spooked and insanely catchy. A truly gothic folk version of Joy Division's "Day of the Lords" simply has to be heard; Roland turns the track on its head and transforms it into a medieval plague song. An acoustic "Bates Motel" and the rare ''I Dared The Devil" (from "The Devil In Love" various artists album) are two further reasons why this compilation is not to be missed or dismissed; these tracks are essential Roland; chilling, inventive and completely original. "I Dared The Devil" in particular is a folk stomp, a Highwayman's lament.

I cannot recommend Paul Roland's music highly enough. Much of his output has been sensitively remastered and reissued of late under Paul's own watchful eye so is much more widely available than it has been in years. Dip in anywhere, you will not be disappointed. Or, should you need a perfect introduction to the man and his muse; put a farthing in Professor Moriarty's Jukebox.

Available directly from the label here.

And tune in over the next few days for an exclusive interview with Paul.