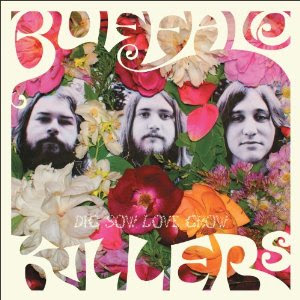 Cincinatti's Buffalo Killer's career is following a similar trajectory to former Alive Naturalsounds labelmates, the Black Keys ( who's Dan Auerbach produced their second album ).
Like the Black Keys, the Buffalo Killers sounded very sure of themselves on their debut, and had a fully developed sense of their own identity, which they've honed steadily with each subsequent release.
Dig, Sow, Love, Grow is a solid piece of work no mistake, and while the appealing  flower-power cover art and title may suggest a change in sound from their previous efforts, they're both a little misleading. The Buffalo Killers are certainly influenced by the era of peace and love, but continue to eschew overt psychedelia in favor of a choogling hard rock sound that draws inevitable but unavoidable comparisons to the likes of the James Gang, Canned Heat, Mountain and the likes - a fine pedigree to be sure, especially now that they've honed their sound to the point where they're releasing albums which are more consistently solid than those of their primary influences.
I mean it as a compliment when I say that any track on here ( or indeed from their entire back catalogue ) would have made a worthy addition to the Dazed and Confused soundtrack, without appearing remotely anachronistic.
They know how to dress their songs in their finest colors too, and have an uncanny ability to place a CSN harmony vocal or a prime piece of Allman Brothers dual lead guitar at the exact point that provides most impact, but is often not expected.
It's this attention to detail and these subtle nuances that make Dig, Sow, Love, Grow an ideal starting point for newcomers to the band, although those that pick up an earlier album first certainly aren't setting themselves up for disappointment either.
There's hope that this will be the album that makes the music buying public pay attention to the critics - who knows, this could be their "Brothers" or at the very least their "Rubber Factory"?

Available on CD here. Or on vinyl here.