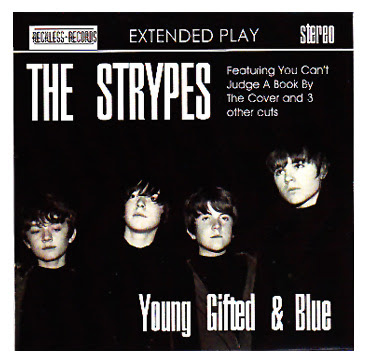 Ireland's got a healthy history of raunchy beat groups stretching back to the days when Van Morrison was an unpredictable and raucous hollerer - quite some time ago now then.
The Strypes are a very young, and highly impressive band that have stepped up as the most recent contenders, and judging by the muscle on show here - they've got what it takes to get noticed.
Their first E.P " Young, Gifted and Blue" is an impressive showcase for their vintage mid sixties mod / beat sounds - aided no doubt by the familiarity of the material, but also by the youthful abandon with which they attack these classics.
"I Wish You Would" channels the Yardbirds with added grit, while "You can't Judge a Book By Looking At The Cover" and "Got Love if You Want It" have attitude and verve to spare.
"Leaving Here" is the highlight for me - all windmilling guitar strums, with just the right hint of freakbeat and a pleasing amount of amp buzz at the fade out as if the producer was too stunned to remember the tape was still rolling.
The production and presence is great - I get the impression that a lot of the original mid sixties beat groups managed to fire like this live, but had trouble capturing the energy in studio which the Strypes have managed to do first up.
They're working on an album of original material now, and if this first E.P is anything to go by, we could have something very special on our hands.