Peter Howell & The BBC Radiophonic Workshop - Through a Glass Darkly 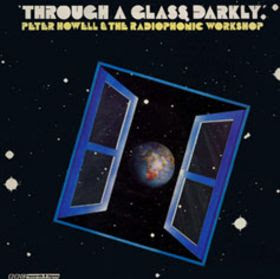 Active Listener readers may be familiar with Peter Howell from his early psych folk work with John Ferdinando in groups like Ithaca and Agincourt, as well as his musical version of Lewis Carroll’s Through the Looking-Glass.
Howell joined the BBC Radiophonic Workshop in the mid seventies and is most well known there for his glossy 1980 reboot of the Doctor Who theme tune, as well as providing incidental music for a number of Doctor Who episodes.
With the hauntology movement in particular showing it's reverence for all things BBC Radiophonic, it's puzzling that so little has been made of this LP, originally released in 1978, and as far as I can gather, never reissued since.
As is often the case with these BBC Radiophonic releases it's a mixed bag, but when it hits the right marks it's pretty great.
The first side is taken up by the epic nineteen minute title piece which covers many moods with some avant garde piano, lots of moody synth work and around the thirteen minute mark, a memorable martial theme.
The second side is where things get alternatively interesting and frustrating, containing both the best and the worst material here. "Caches of Gold" and "Colour Rinse" are unlistenable, chirpy, upbeat numbers that I'd like to think have just dated badly, but can't really imagine enjoying in any era.
The other three tracks are fascinating though.
"Magenta Court" is a propulsive, prog synth number with great drumming, some unexpected, searing electric guitar work and weird treated vocals that must have been an influence on the creepy vocal choir featured on "Cantalus" from Belbury Poly's "Belbury Tales".
"Wind in the Wires" mixes folky, pagan guitar work with a haunting synth theme and a rhythm section that've obviously heard a bit of Pentangle in their time. If I'd been told that this was an outtake from the Advisory Circle's "As the Crow Flies", my only response would be, " Why didn't you put it on the album?"
Last up is the highlight for me, "The Astronauts", which sounds like the theme to some lost seventies BBC Arthur C. Clarke show.
I'm not usually one to advocate downloading, but this wee radiophonic gem of an album really should be heard by a wider audience, and can be downloaded at this blog, at least until someone reissues it.
And this is a prime candidate for a reissue - Trunk Records would do it proud I'm sure, having released David Cain's Seasons recently, and any fan of that will surely find much to love here. In the meantime checkout the download, or keep an eye on ebay - original vinyl copies turn up every now and then.
Have a listen to "The Astronauts" here: