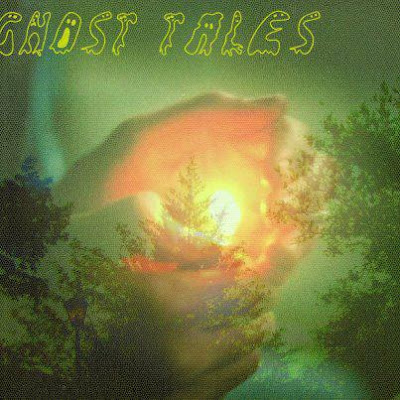 There are so many earnest, home recorded albums doing the rounds at the moment on bandcamp, that it's all too easy for a little gem like Happy Daze ( a.k.a Alexander Milburn's ) "Ghost Tales" to go unnoticed.
I spend a bit of time trawling bandcamp every now and then, having a quick listen to anything with a psychedelic tag, and more often than not come away empty handed, but on one occasion I picked this up and have returned to it often.
It's an intriguing listen that on one hand feels very intimate, but on the other retains a sense of mystery that keeps me from getting fully immersed, but keeps drawing me back at the same time.
It's an appeallingly ramshackle home recording, based around folky singer-songwriter material ( more early Bob Dylan than David Gray - so don't worry, I haven't gone soft on you ) but overlaid with thick layers of hazy psychedelic treatments - the majority of which I'm assuming are processed or backwards guitars, but the lo-fi nature of the recording makes it hard to tell.
For the vocal tracks, imagine Elliott Smith's "Roman Candle" and you've got a good idea of what to expect, only with some boffined psychedelic guitar tech noodling along to it. Elsewhere there are plenty of trippy guitar moodpieces to link the vocal tracks. This, coupled with the hazy nature of the accompaniments make it a hard album to concentrate on, but a perfect substitute album for when you're in the mood for something along the lines of a classic Tangerine Dream album, and it's all the more effective when occasionally the murk ( I use this word in a positive sense ) parts to make way for an intricate acoustic guitar interlude, or a nice, direct couplet.
Certainly original. While the recordings are occasionally primitive - vocals often break up, especially on propulsive stand-out "Peace, Love & Harmoline", this actually suits the material nicely, and in the case of the lovely Coco Rosie-like nursery rhyme "Family Songs" the lo fidelity accompaniment is key to it's success.
Milburn's released another e.p and single in the short amount of time since this came out.
On the evidence of this I'd say keep an eye on him - certainly if you're a fan of the likes of the War on Drugs, or Kurt Vile you'll find much to appreciate here.
You can download his material freely or for a choose your own price donation here.