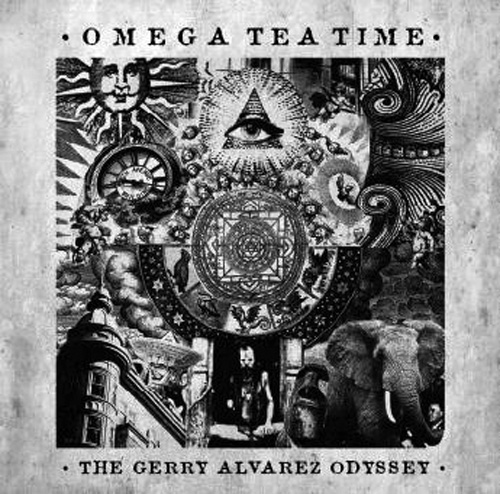 The power pop revival of the mid to late nineties may be well and truly over, but Gerry Alvarez obviously missed a meeting - and good thing too as the world would be a less tuneful place without his work.
Also a member of Canadian garage revivalists The Gruesomes, "Omega Tea Time" is Alvarez' second solo album.
Now to digress slightly. Beatlesque is a term that you've heard me use often on this blog, and this tells you two things.
Firstly - my descriptive powers are obviously reasonably limited.
Secondly, and most importantly - there are a huge number of artists out there indebted to the Beatles, and you'd be safe in assuming that these artists are generally very much my bag.
So, yes, Beatlesque is certainly a qualifier I'd use to describe Alvarez' songs - although not in the prime psychedelic manner of artists like Dog Age, The Sufis et al.
Alvarez instead taps into the melodic songcraft, rather than the soundcraft that these other artists seem more inspired by. In this regard he fits in nicely with classic power poppers like Cheap Trick, the Raspberries and Jellyfish, artists with whom he shares a contemporary sheen.
Opener "No Man's Island" lets rip with a vocal that would have fit nicely on one of McCartney's rockier  seventies efforts, while "Middle Way" is the sort of track that sneaks into your psyche so quickly that after my third listen I was convinced I'd known it forever.
For all you psych fans though, it's in the middle of the album that things really heat up.
"Repression" has some lovely chiming arpeggiated guitar work just like George would have done and complex multi part harmonies that sound totally psychedelic without resorting to any studio trickery.
"Cosmic Weaving" is the highlight though, showcasing lessons learned from many listens to "Revolver" - a bouncing McCartneyesque bassline, killer chorus and some lovely droning guitar work that sounds like a mixture between sitar and backwards guitars, and is quite possibly neither.