8X8 - The Anatomy Of An Apricot Review 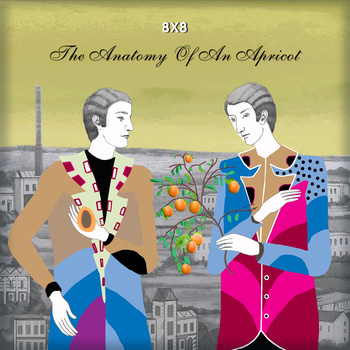 A total product of it's age this, 8X8 are Alexander Khodchenko from the Ukraine and New Yorker Lane Steinberg - two gentlemen who have never actually met, but have somehow managed to piece together this remarkably cohesive baroque psych pop gem by e-mailing files backwards and forwards over a period of two years.
The resulting album should by all rights be stilted and lacking in chemistry, with  a cold digital sheen, but manages to deftly defy these expectations, sounding very much like the work of a late sixties band recording live in studio - albeit one with the opportunity to overdub some much more ambitious accompaniment than albums of this era were often given.
This professionalism is less of a surprise once the artists credentials have been checked however. Khodchenko has been knocking out classy psychedelic pop since the late eighties, while Steinberg helmed the Wind, whose 1982 album "Where It's At With The Wind" is certainly the finest piece of Merseybeat to emerge from Miami, and has a number of other interesting projects under his belt.
There's a great deal of anglophilia present here, with an air of Zombies / Bee Gees infused baroque pop dominating proceedings, tempered nicely by Steinberg's strong American accent and high Beach Boys harmonies. It's not all sweetness and light either - opener "Cristal Illusion" is a good example of their dynamics ; a sweet pop tune with an impeccable, sighing chorus that builds to a powerful and heavy bridge with fine, lyrical guitar work and pounding drums, before sneaking out on a blanket of mellotron and fluttering guitars.
Other tracks recall early Procol Harum, "Village Green" era Kinks and the Beatles "Abbey Road" given a contemporary overhaul which doesn't tie it to any particular era.
Immaculate - I will be investigating these two further.