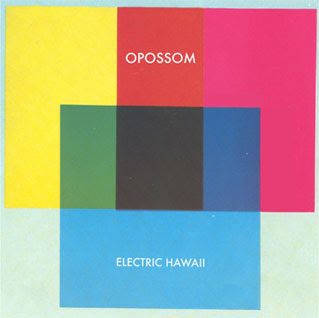 Opossum is the new musical identity of ex Mint Chick Kody Nielson. The Mint Chicks were a very popular underground New Zealand act who coined the term troublegum to describe the music they made - experimental noise rock with elements of punk, pop and psychedelia used to varying degrees.
The Mint Chicks are no more alas, but in their place we have two acts that I like a whole lot more, and have a whole lot more to offer in my opinion.
Ruban Nielson was first off the mark with the first Unknown Mortal Orchestra album which was a splendidly lo-fi piece of noisy psych pop that sounded like it was recorded in his bedroom.
As good as that album was, Brother Kody's first Opossom album ups the ante considerably with a near flawless collection of sunny psych pop tunes that reimagine a more raucous and instrument focused take on Caribou's much adored "Andora" album.
Electric Hawaii incorporates all sorts of seemingly disparate influences - tropicalia, english psych, beach boys harmonies, a bit of krautrock into a diverse sonic melange that on paper sounds academic and just plain messy.  Neilson is a master of his craft though, so what would seem self indulgent and over-ambitious in the hands of lesser mortals is seamlessly mixed together here with such enthusiasm and self awareness that it's impossible to resist.
Check out opening track "Girl", which is essentially a sunshine pop version of "Femme Fatale" and fall in love.
Unknown Mortal Orchestra have a new single due out on Jagjaguwar soon - here's hoping the bar is raised again.