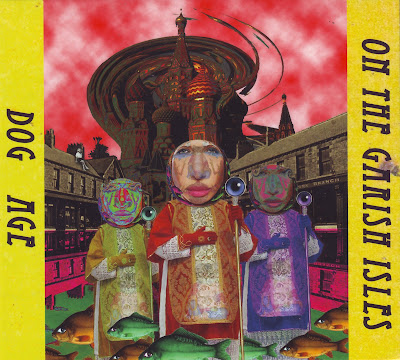 With a career spanning twenty five years and between six and ten albums (depending who you believe), it's slightly perplexing that Norway's Dog Age aren't a little more well known and respected.
There seems to be criticism in some circles that they sound a little too much like the Beatles.
Well, in the absence of any new Beatles material and with Paul McCartney putting out obtuse classical material, I'm quite happy to accept Dog Age as an admittedly less ambitious, but entirely enjoyable substitute.
Sure, in terms of a cohesive statement album they've never put together a Sgt Pepper's or an Abbey Road, but they're very well versed at Magical Mystery Tour or at least the Yellow Submarine soundtrack.
So yes, they wear their influences on their sleeves quite prominently, but are certainly not the one trick ponies some seem to believe.
With five band members sharing songwriting credits, there's a huge variety of material on offer here, from concise moustachioed Beatles psych-pop, to eastern tinged devotional ragas ( "Lord" encapsulates everything I hoped Quintessence would sound like ), to emotive psychedelic guitar suites ( "Wondering" brings to mind a Pink Floyd where Syd Barrett and Dave Gilmour are somehow able to coexist ) - all of it excellent, as are the previous albums I've heard from this under rated outfit.
If you fancy a little something which draws from the U.K psych pop songbook extensively, with memorable hooks, excellent musicianship and immaculate production you could do a whole lot worse than checking these guys out. Fans of the Sufis and the Paperhead should check them out to see what the previous generation of U.K psych devotees can cook up.

Available as a digital download here, with sound samples.