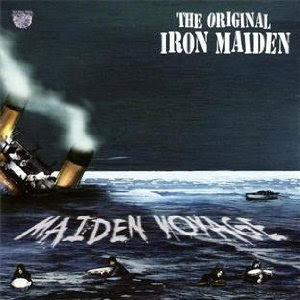 That's right - before Bruce Dickinson, before even Paul Di'anno there was another Iron Maiden that most folks have never heard of.
Having failed to make an impression (and struggling to get bookings) a young English heavy rock outfit known rather unfortunately as Bum, had a brainwave and changed their name to Iron Maiden, releasing one excellent 45 then calling it quits.
The rather excellent Rise Against Relics label are doing us a major service by releasing these tracks - the two sides of the 45 plus a selection of demos to give us the fullest possible overview of a band who should be known as more than just "the other band who had that name".
"God of Darkness", one of the demos here can lay claim to being one of, if not the earliest example of doom metal with an occult lyric that predates the first Black Sabbath LP by a year.
Of course this isn't doom metal as we know it these days. These 1969 recordings have more in common with Led Zeppelin than they do with Cathedral, but collectors of early hard rock will find plenty to enjoy here.
The quality control on the demo tracks here is excellent too - there are plenty of officially released albums by other bands from this era with muddier sound and less committed performances than you'll find here, and even when stretching out on the twelve minute "Liar" they're concise and avoid the tendency to meander.
If occult, slightly theatrical heavy rock whets your whistle, then this will be very much your bag and bears favorable comparison to the likes of Black Widow, Warhorse and Saturnalia. And if you're an open minded fan of Steve Harris' troupe who picks this up accidentally or out of curiosity, it's entirely likely that you'll dig this.
There are even hints of jazz in "The Ballad of Martha Kent", certainly far more subtle than a band who once went under the moniker of Bum have any right to be.