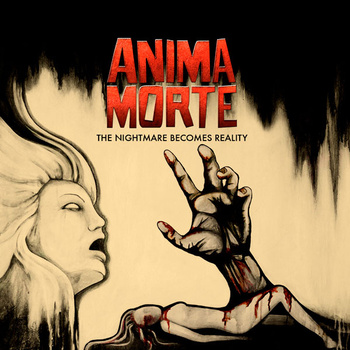 Digitally released last year, this piece of moody Swedish gold has just had a much deserved vinyl release which is nigh on essential IMHO.
While the cover art may lead you to expect some sort of diabolical extreme metal, what Anima Morte offer up is certainly informed by metal, but closer to progressive rock in it's execution.
Using the soundtrack work of Goblin and to a lesser extent, Fabio Frizzi as a springboard, they replace the synths with vintage hammond organs and mellotron, crank the gain up on the lead guitars and make fine use of a fluid rhythm section to recreate and slightly update this classic seventies / eighties sound.
Those who've heard previous releases will know exactly what to expect, as this is business as usual for Anima Morte, who are continuing to refine their sound impressively. For newcomers, imagine Opeth at their mellowest performing an instrumental score to a Dario Argento film and you should pretty much be there.
I adore the soundtracks that Anima Morte's work evokes, but one failing these soundtracks occasionally exhibit when used purely as a listening experience is a lack of content - one spectacularly memorable and creepy theme, coupled with a bunch of reprises and some moody, but seemingly improvised incidental music that sounds great at the time but doesn't linger in the subconscious. Of course, these scores are written primarily to accentuate what's happening onscreen, not as an isolated listening experience so approaching them with the right expectation is key to enjoying them.
Anima Morte are smart enough to realize that without a film to accompany them, they need to be a little more ambitious and work a little harder on the writing side of things, so every track here has it's own identity and any and every one of these tracks are well developed enough to imagine as the theme to an unknown Lucio Fulci zombie flick.
Indeed, it's truly difficult to listen to this album without visualizing hordes of walking dead roaming the European countryside.
Now, if only they still made zombie films good enough to warrant this as a soundtrack.....