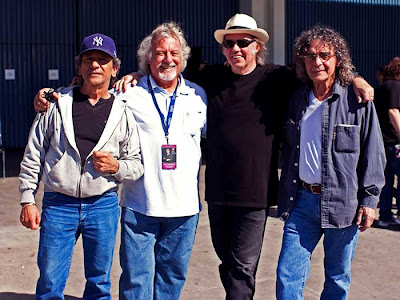 Neil Young and Crazy Horse have another new record due out in October.

Recorded just after the sessions that produced "Americana", the wonderfully titled "Psychedelic Pill" ( I like this already ) is the first album of all new material recorded by the full Crazy Horse lineup since "Broken Arrow".

It will be available on 2xCD, 3xLP, download, and Blu-ray formats, with videos coming to accompany each track.

Talking to Rolling Stone magazine Crazy Horse guitarist Frank Sampedro had this to say : "It's us jamming and having lots of fun. I think that [late Crazy Horse producer] David Briggs would be proud of it... Once he was gone, I felt like we lost our compass a bit. We had the sound and we had the big machine, and we could play anything and play pretty good, but we weren't putting any great records together. I mean, Broken Arrow was OK. It wasn't like Everybody Knows This Is Nowhere or Rust Never Sleeps or Ragged Glory."