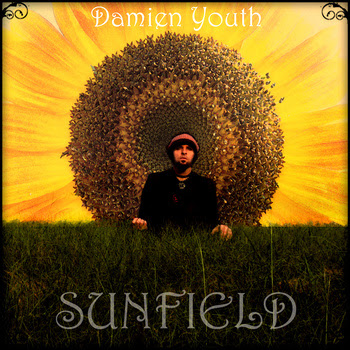 Damien Youth is a name that's been on the periphery of my awareness for some time, but the formidable size of his back catalogue has always prevented me from investigating further.
It finally dawned on me that the best chance of finding a good entry point would be to go straight to the source, so I asked Damien himself.
I ended up with "Sunfield", an album originally released in 1999, but re-released on vinyl recently ( in 2011 ).
It's a great album that wears it's influences on it's sleeve in a respectful and forward-looking fashion, and uses them as a springboard for his own fanciful and evocative creations.
Opening track, "Morning Cloak Sunfield Floating Stage Fright" is an ambitious mini suite that takes in a whimsical, and presumably purposefully Donovanesque lyric ( "Lady Juniper with glitter in her hair" ) and couples it with a more hard rocking chordal sequence that channels the more deranged acoustic output of Bowie's "Man Who Sold the World" album ( "After All" etc. ), something that Bowie himself seemed either unable or unwilling to do after releasing that album.
Elsewhere there's an excellent cross section of upbeat acoustic flower pop ( Sunfield is the perfect title for this album ), and more delicate and contemplative fingerstyle folk tunes, ala the Beatle's "Blackbird".
The only criticism I can muster is that a couple of tracks have synthesized horn parts that are perfectly adequate, but make you long for the real thing - otherwise this piece of sunny, sixties influenced folk-pop is pretty much tops in my book.
Readers of this blog will also undoubtedly enjoyed Mr Youth's "Retrospectoscope 1966-1970", recorded under the pleasingly daft moniker of Walter Ghoul's Lavender Brigade - a prime piece of 1967 style London psych-pop that, to this listener at least, beats the Dukes of Stratosphear at their own game.

You can buy it on vinyl or digitally by clicking the bandcamp link below.