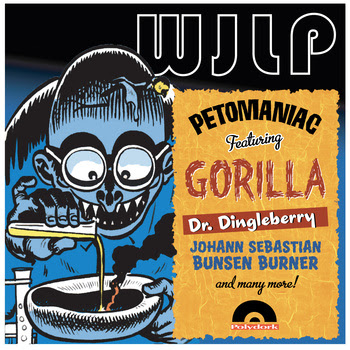 Aside from being one of Mel Brook's characters in "Blazing Saddles",  William J. Le Petomane ( real name unknown ) is yet another undeservedly obscure gentleman who now, through the magic of social media ( and soundcloud especially, where he's got quite a following ), is starting to get the exposure that music of his caliber deserves.
Petomaniac is a very smart instrumental album, and showcases an impressively diverse selection of originals that conjure up images of tv and movie themes of bygone days.
"Gorilla" has a whiff of the Munsters about it. "Greek Salad" has a lyrical hammered dulcimer theme like vintage Henry Mancini. "The Journey Home" and "Ocean View" are surf rock at it's finest. "Mord in Kino" sounds like early seventies John Barry with it's squelchy synths. "The Forsaken" is spaghetti western heaven. "Dr Dingleberry" taps into the same spooky fairground ska that the Specials used to dabble with so well with added spy guitars. "Operation Interstellar" is the highlight though - a grand instrumental Bond theme with walls of mellotron and acid guitar.
Cross pollination is the name of the game here, with WJLP mixing genres that shouldn't necessarily work together with such gleeful abandon that it's not too much of a stretch to picture him as the labcoated mad professor pictured on the sleeve.
You can buy "Petomaniac" digitally through bandcamp ( here ) as a name your price purchase.
One of my favorites of the year so far, and totally deserving of a few of your dollars.
Readers are also advised to check out "Head" on his Soundcloud page ( follow the link from his bandcamp page )- a psych/pop classic to be which shows he's a dab hand at throwing vocals into the mix too.