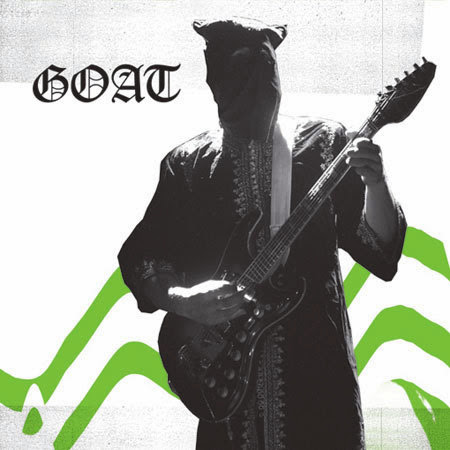 Goat exploded onto the psych scene almost from nowhere in 2012 with their debut album ‘World Music’ and blistering live sets at both Glastonbury and Roadburn. An apparently revolving cast of musicians that always appear masked and in costume, their live shows have quickly become legendary. The Swedes now follow up their subsequent ’Stonegoat’ 7”with a recording from the Camden Ballroom that ably showcases their aptitude for dynamic and memorable performance.
When they emerged Goat appeared as a fully formed act; there were no initial faltering steps or misfires. ‘World Music’ was as accomplished an album as you would find at any point in a band’s career, melding Afrobeat rhythms to full blown psyched out acid jams and chanted vocals. Freeform yet incredibly tight, ‘World Music’ was startling in its ambition and scope. It sounded like it came from an earlier age, one inhabited by a particularly full on and frazzled The Grateful Dead or some kind of Hendrix/Sly Stone hybrid. In short, it didn’t sound remotely how you would expect a modern day Swedish rock band to sound.
This live artifact gathers all the tracks from their debut and adds ‘Stonegoat’ and its B-side ‘Dreambuilding’. However this is no retread; these songs are twisted and pulled in unfamiliar and unexpected directions –they come to life in frantic and often jazz influenced discordancy and improvisation, as in the version here of ‘Let it Bleed’. The guitars sound massive and move like clockwork; Goat can work a groove and they are as tight a band as they come. ‘Dreambuilding’, with both its Isaac Hayes styled heavy funk and glittering psychedelic guitar, should be an uncomfortable combination of styles but Goat are master alchemists; they brew their influences and sounds into something altogether new and more than the sum of its parts. The Goat trilogy (‘Goatman’, Goathead’ and ‘Goatlord’) are featured with added apocalyptic fuzz guitar wig out splendour and venom. This writers personal favourite ‘Det Som Aldrig Forandras’ is an explosion of colour and sound, the guitars swaggering like the theme from a 70s cop show. With this live recording you may be missing out on the sheer spectacle of Goat live but the excitement bleeds through nonetheless.
Essential, not just as a stop gap until their new album but as a solid album in its own right, ‘Live Ballroom Ritual’ joins the ranks of classic live albums that capture a band at its finest, most inventive and most exploratory. Get your Goat.