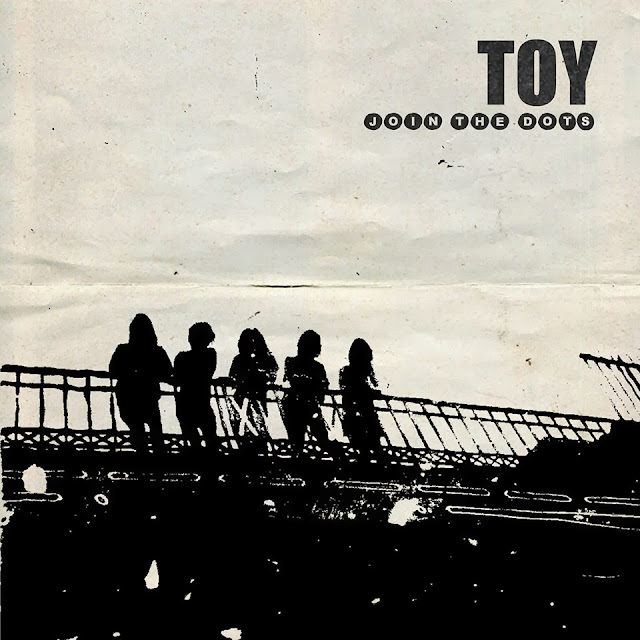 One of the things that I love most about Toy, and one of the reasons that they've achieved some mainstream success where their contemporaries are consigned to niche appeal status, is that they never sound like they're trying to slavishly reproduce a bygone era. They certainly conjure memories of a number of seemingly contrasting bands from various golden ages, but they always sound like a definitive product of the now.
I've seen several reviewers complain that the Krautrock elements of last year's debut have been toned down and the sound 'popped' up here on "Join The Dots". Fuck knows what they were listening too as, if anything, I hear even more motorik drive here, and if the intense build of "Chopper" on the debut worked you into a frenzy as much as it did I, you'd better reach for your medication because there's plenty of that here.
Opener "Conductor" ushers things in perfectly with a huge wall of glacial keyboards, and a rhythm section and delay ridden guitar part that sounds like Neu tackling "Another Brick in the Wall" - an appropriate start to a massive sounding album that tastefully straddles the divide between arena and art.
There's plenty of pop smarts too with "Join The Dots" and the woozy My Bloody Valentine-isms of "Endlessly" in particular impressing with their memorable choruses. The devil is really in the details however, whether it be the eighties keyboard layers of "Frozen Atmosphere" (think New Order's "Sunrise"), or the propulsive post-punk basslines of the title track, Toy prove here that they can weave the disparate strands of their record collections into a cohesive whole that stands strongly on it's own two feet.

Available on Vinyl, Digital or CD.