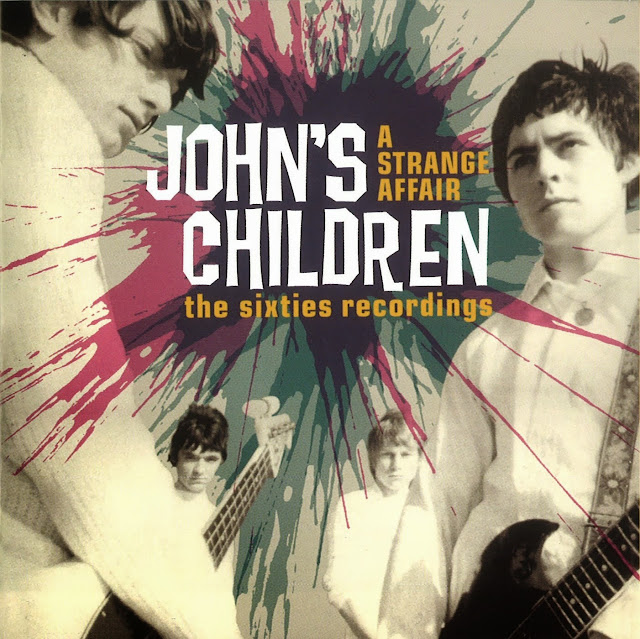 Managed by Yardbirds Manager Simon Napier-Bell (who named the band after bass player John Hewlett in the hope that it would keep the rest of the band from sacking him), John's Children managed to build a sizeable legacy and a fearsome reputation that collectors, mod fans and primitive psychedelicists alike are still cherishing today.
This exhaustive new two disc collection from Grapefruit Recordings (which includes all known recorded output from 1966-1970) is the perfect balancer to test whether their reputation rests solely on their purposefully outrageous onstage / offstage antics (they were kicked off of their support slot for the Who's 1967 tour for being (in Pete Townshend's words) "too loud and violent"), or on their own musical credentials.
Most well known to the general public (if at all) as Marc Bolan's first band, it's really Andy Ellison who's the star of the show here, taking lead vocals on most tracks (including "Desdemona" and "Midsummer's Night's Scene", the two Bolan penned shoulda been hits) and guiding the band through it's many ups and downs. Bolan himself was only a member for around four months and took a bit of time to acclimatise to his role as a primal electric guitarist rather than the whimsical wyrd-folk that was his more natural disposition at the time.
Disc One begins by collecting their various singles and B-Sides - largely the stuff their reputation was built on, and it's material that has aged exceptionally well with a punchy, primitive mod edge that straddles early Who and Pretty Things, lashings of psychedelia and on "Remember Thomas A. Beckett" a memorable falsetto vocal and distinctly odd verse melody that makes it a highlight of the era.
All very impressive so far then. Following on from this we have a raft of much more ornate studio recordings credited to Andy Ellison solo. These are much less raunchy but nonetheworse for it, and show a subtlety that one wouldn't expect to flower from those early singles. There are even a couple of Beatles covers that sound like Andy singing over backing tracks from early Dusty Springfield records - very classy, totally unexpected, and hugely rewarding.
Disc Two continues with the infamous "Orgasm" album - a fake live album, recorded in studio with overdubbed crowd noise "borrowed" from the Beatles film "A Hard Day's Night" and mixed at twice the volume of the music itself. It's nowhere near as much of a brow furrower as you've been lead to believe though and is thoroughly enjoyable once you've acclimatised to the excessive background noise. Round this out with a batch of sundry outtakes and alternative takes and you've got a diverse mixture of uniformly strong material that deserves more attention than footnote status among Bolan fans and proves that there was much more potential here to be tapped.