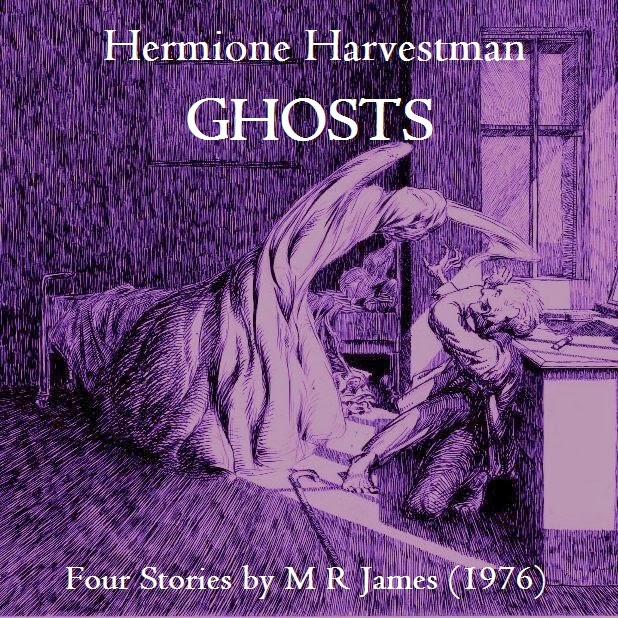 I've always felt an affinity with the English. Even though I spend my Southern Hemisphere Christmas basking in the sun, there's always been a part of me that associates Christmas with early twilight and a roaring fireplace, preferably accompanied by some form of spooky televisual accompaniment.
An English Christmas simply wouldn't be the same without a good ghost story, and after a lean few decades the BBC and Mark Gatiss are spoiling us this year with two M.R James related features - "M.R James: Ghost Writer" (a documentary), as well as a new Ghost Story for Christmas adaptation of "The Tractate Middoth", directed by Gatiss.
For those not satisfied with this visual feast, I'd like to draw your attention to another more obscure M.R James related artifact, dating back to 1976, but only made available to the general public over the last few months - but first an introduction of the artist responsible:
Hermione Harvestman is a name known to very few, but thanks to the efforts of Sedayne (of wyrd folk duo Sedayne and Rapunzel), her groundbreaking electronic compositions are finding a wider and appreciative audience through a rapidly expanding bandcamp back catalogue, lovingly curated by Sedayne (who knew her well during the last ten years of her life.)
An accompanying statement introduces her:
"Harvestman played the organ in a small Catholic Church between 1967 and 1995, regularly featuring one of her sacred ‘Concrete Psalm Tones’ in lieu of organ music during Holy Communion or The Adoration of the Cross on Good Friday. She also composed music for several amateur theatrical productions – the best of which being the starkly evocative & exquisite medieval miniatures she produced for ‘The Durham Pilgrims’ in 1972 which takes its cue from Chaucer.
A devout Roman Catholic all of her life (up until her illness and death), Hermione nevertheless incorporated elements of Folklore, Medievalism, Paganism, Astrology, Earth Mysteries and Cosmology into her world view, viewing her compositions in terms of personal devotions to the various aspects of her life, the vast majority of which were never meant for public consumption."
I've sampled a number of her works already and they've all proven suitably adventurous and forward thinking, but these four pieces based on the short ghost stories of M.R James are the works that have really stuck with me.
I've seen plenty of comparisons made to the BBC Radiophonic Workshop's Delia Derbyshire and Daphne Oram in regards to this work, but to my ears the sound is more attuned to that of the early eighties Workshop contributions of Peter Howell and Paddy Kingsland - in fact, if it didn't seem so unlikely for them to have heard Harvestman's work, I would have assumed she was a key influence of theirs.
Opener "Ruins (A View From a Hill)" wastes no time in setting an uneasy mood which is expertly manipulated to provide almost endless frissons and none of the longeurs one would perhaps expect from pieces of this length "improvised in real time electronic seance, when the wind blew high on a night of October", with it's occasionally discordant timbres sending chills up this listener's spine, while providing the perfect musical backdrops to readings of the accompanying stories.
The supplementary pieces from the late seventies and early eighties fit in effortlessly too.
While it's unlikely that many will play this from end to end (at well over two and a half hours), it's an ideal platform for dipping into, and accomplishes the impressive task of making James' famed literary contributions even more unsettling, while establishing a tone that sounds at once both sparklingly futuristic and hermetically archaic.
Perhaps it's best to leave you with Hermione's own description of these pieces:
"...music for my ears alone for it's quality is evocative in a very particular sense but rarely any good in a purely musical sense as my mind, I fear, was very much elsewhere. It's all down to chance, dreaming trance and enchantment. This is magic music that very often terrifies me and I would hate anyone to be similarly effected by it.... "