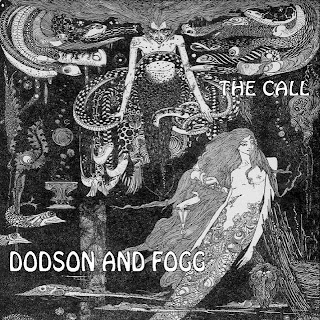 Interview by Grey Malkin (The Hare & The Moon).

Dodson and Fogg are, to this writer’s mind, one of music’s finest and most intriguing exponents of modern psychedelia. So, to mark the release of their latest opus ‘The Call’, I asked Chris Wade (the multi-instrumentalist who effectively is Dodson and Fogg) a little about his past, his present (including the new album) and also about what the future holds for this unique and accomplished artist.

I’m curious as to what factors inspired you to start recording music; what led to the first Dodson and Fogg album? What was your vision for the band and your music?

Well I have always been interested in recording. My brother and I used to record a lot as kids on tape recorders and 4 track machines. I got one myself in my late teens and would mess around on it. The most you could do was at most 5 tracks though. The extra one I found out, you could overdub something as you converted it on to a proper tape, so I started learning about mixing and recording back then about 10 or so years ago. I then had a band with my brother and sister but it kind of ended and I took up the writing thing instead. It was only last year that I started recording songs again on my home set up, getting together some older ideas and some new ones. When Celia from Trees agreed to do some backing vocals I was thrilled, so from then on I started putting my all into it. If I had a vision or have one it is to keep releasing albums of varied music that pleases me and others. It's a natural development and a proper outlet for me too, so I suppose it is just going to flow on like this hopefully. I love the fact there is a small cult following interested enough in what I do to keep wanting albums. It's a childhood dream of mine to be releasing albums, so I am just enjoying the feedback.

Dodson and Fogg are hugely prolific, with ‘The Call’ being your third album this year. How do you manage to write such an amount of consistently strong material; what are your working methods? Is strong coffee involved?

I do drink a lot of coffee and tea actually, always nipping off to the toilet for a pee. I have coffee from when I first get up and also sort the cat's litter tray out first thing in the morning, and when you have three cats this is definitely the way to wake yourself up. Oh sorry that's horrible...But I do work everyday on the music now, whether it be promotion, writing lyrics, just playing the guitar and coming up with ideas, phrases, melodies. I sometimes come up with a little lyric melody and record it, maybe hum ideas into the microphone and get it down for later when I start recording it properly. So really, working from home as I do, there are no set hours and there is no time cut off either, so I could be recording at 8 in the morning or at midnight. It's like not having a turn off switch. I am only ever a few feet or metres away from my instruments. Also, to me, the three albums this year have been at a reasonable pace because I have more time to write and record than other artists who might be out touring a lot. Also, writing and recording is my job so I need to keep at it in that respect too.

There have been a number of high profile and illustrious guests on your albums such as Celia Humphris of Trees, Amanda Votta of The Floating World, Nik Turner from Hawkwind and Alison O' Donnell of Mellow Candle. How do these collaborations come about? And who would you like to collaborate with in the future?

Well with Celia I was a big fan already, and had interviewed her in 2010 for my Hound Dawg Magazine, so I still had her email address. I honestly did not think she would say yes, but she did and I still cannot believe she sings on my songs. Trees were brilliant and her voice is better now than it has ever been in my opinion. It's a finely tuned instrument itself. It's good that they seem to get more popular as time goes by, because I think they are the best of that magical folk rock era. There is something special about those two albums. With Nik Turner, I heard him playing on an old Hawkwind track and thought he would sound good on some songs for the first album, so I got in touch with him and he was really nice and approachable and just sent them back to me when he had done the flute parts. I heard Amanda on a radio show I had been played on, might have been Sideways Through Sound or something, and I got in touch with her, same with Alison from Mellow Candle. It's basically that, I hear them and just think it's worth a try to ask them if they'd like to collaborate. It's really exciting when they say yes, and I love mixing their contributions into the songs. I'd like to work with Alia O Brien from Blood Ceremony. She was going to do a track on the Call but I was releasing it before she could get to the studio, but she wants to do something next year on the next album. One person I would love to work with is Ray Davies, one of my heroes. I always loved Lou Reed too, not that I would have ever got the chance to work with him though. Alison Goldfrapp has an amazing voice, so she would be amazing too, but I doubt that would ever happen.

Your music is uniquely your own yet I detect elements of 60’s British rock such as Syd Barrett, British psych and the Kinks. What influences do you have and which do you think are visible in your songwriting?

Yeah I love the Kinks, one of my very favourite bands. I love Arthur and Village Green, that lovely era where their music sounds magical. I love The Beatles, Floyd especially with Barrett, Lou Reed and the Velvet Underground. I like a lot of stuff, Donovan, Jethro Tull, Leonard Cohen, Zappa, Lindisfarne, Trees, Dylan, Goldfrapp, Sabbath, but I am not sure how they influence it. I never set out to replicate a band or sound, but I think the influences probably seep through into the music subconsciously like they probably do with a lot or artists. If people can spot my favourite groups from listening to my music though it must show the influences are there. The way I see it is I like to record music I can listen back to myself for pleasure. I do not get people who say they cannot listen to their own music, but then again we are all different. I just like the thrill of recording a decent track and putting in different sounds and the process of mixing and adding and taking things away. Listening back to a mix and being proud of it is such a great feeling. Hearing an album back from start to finish and being satisfied is even better, as you know yourself.

As well as your music you have had a number of other media projects on the go such as working in comedy and writing, including penning books on The Incredible String Band and Black Sabbath. Tell us more about these ventures.

The writing started in about 2008 when I did my first fiction book Cutey and the Sofaguard. That story started as a laugh really because I worked in a stationery shop and me and a friend there used to write down weird character names and odd stuff. Weird things used to happen there anyway and a lot of it got lumped together in my head and I made a full fiction story out of it. In my head I had Rik Mayall as the narrator as I wrote it, as a kind of guide for the story. When I finished it and released the book online, I one day had the idea of releasing an audiobook of it and as a spur of the moment thing I emailed Mayall's agent to ask if he would like to read it. They said they might get back to me in a month or so, so I sent it along via email and thought nothing else of it. A few days later a reply came in saying Rik wanted to do it, and I went down there to meet him, to go over the script and stuff, and a week or two later we recorded it in a dodgy studio down an alleyway in Shepherd's Bush. Really surreal. From then I started doing my free magazine, some fiction and non fiction, as well as comedy podcasts with my dad and all sorts of odd stuff. I haven't done as much of all these things since Dodson and Fogg started though.

In my humble opinion ‘The Call’ is your strongest set yet; what have been your favourite Dodson moments or the tracks you are most pleased with?

Thanks, I'm really happy you like it. I am really happy with the new album. Mystery is my personal favourite I think, and I am very proud of the work Celia has done on the new album and the other albums for that matter. It's hard to pick highlights, but I think this new album is the one I am most proud of. I think it's a confidence thing, knowing what you can do at home on a basic home set up, learning and growing as a musician, as you may agree with your own music. Suddenly off the new album is a favourite too, Ricky Romain the sitar player is astonishing. I also like Crinkle Drive off the first album with Nik, as I first wrote that song as a teen and I am really proud it has seen the light of day with him playing flute on it. All Day Long and Meet Our May as well, they were old ones I originally wrote in a different form years ago, and Celia does amazing vocals on them.

What is next for Dodson and Fogg? Any live dates? How would this work with you being effectively a one-man band?

I keep wanting to do them but I just like recording really when I think about it. I don't really personally know any musicians who might want to do it and every time I get in touch with some interested people I never commit to it. Maybe I'm not meant to do it until it's all right and fitting into place perfectly. I guess I could go out with a bass drum on my back, a guitar, a flute up my.... no..... not that. I think I will stick to recording for now. The next thing to do is to write more songs and get an album together for some time next year. I have some ideas at the minute, been messing around recording today actually, but I am going to take my time over the next one.

Grey Malkin's review of "The Call"