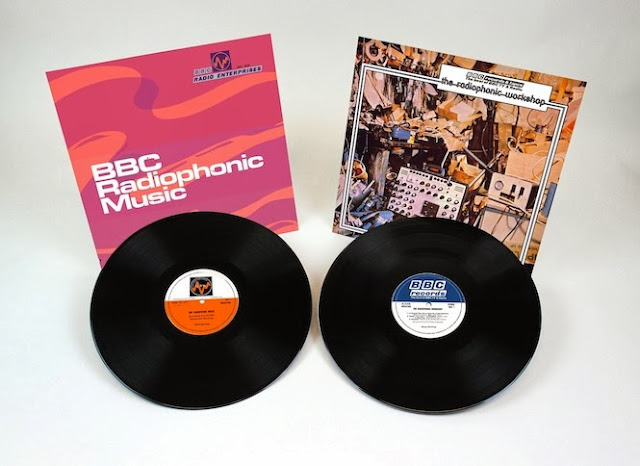 The Music on Vinyl reissue label is a contrary creature that can't seem to decide whether it wants to produce pricey (but high quality) reissues of albums that even the most casual browser would have no problem finding within five minutes in their nearest charity shop, or genuinely rare blinders that there's a huge demand for. Fitting firmly into this second category are these two new selections - without a doubt their most exciting acquisitions to date with both being the subject of numerous protracted, and ultimately unsuccessful ebay battles for this writer.
Originally released in 1968 and and 1975 respectively, these two showcase LPs for the BBC's fabled Radiophonic Workshop are essential documents of groundbreaking electronic music that have proven hugely influential as a major source of inspiration to Boards of Canada, various Ghost Box artists and the like, as well as highly listenable entities in their own right.
"BBC Radiophonic Music" showcases the work of John Baker, David Cain and the artist most associated with the Workshop - Delia Derbyshire.
Having only recently acquired their first synthesizer at this point, the selections mostly showcase their painstaking musique concrete cut and paste tape methods, as well as early use of oscillators. While this approach may sound perfect for creating moody backdrops for eerie Alien planets, there's also plenty of melodic content. Baker and Cain's pieces often have a childlike jingle appeal, belying their earlier careers as a jazz pianist and jazz bass player respectively, but it's Derbyshire's pieces that cast the longest shadows with extremely spooky pieces like "Pott au Feu" and "Blue Veils and Golden Sands" leading the imagination down all sorts of darkened corridors.
1975's "The Radiophonic Workshop" casts the net a bit wider and features plenty of younger blood, with an emphasis on the various synthesizers they'd acquired by this point (particularly the EMS VCS 3 and the EMS Synthi 100),  rather than the primitive but effective tape splicing techniques that the Workshop initially became known for. It's slightly less innovative as a result but I'd argue more listener friendly, and full of marvelous vintage synthesizer textures and extremely evocative tunes.
This is what the future sounded like in 1975, and while it's more than a little disappointing that the future actually ended up sounding like Nickelback and One Direction, we can still recline in our polyester best and marvel at the limitless invention of these pioneering musical boffins.
Absolutely essential listening for anyone with an interest in the evolution of electronic music - and Mark Ayres' careful remastering makes these sound better than ever.

Check out the amazing documentary "The Alchemists of Sound" here: