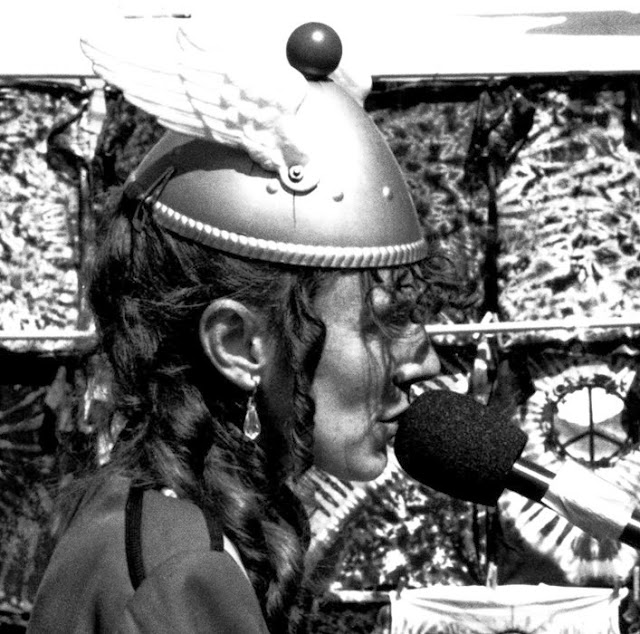 Back in 2000, "Songs in the Key of Z, Vol. 2: The Curious Universe of Outsider Music" appeared on the scene featuring a startling casiotone / vocal interpretation of the Electric Prunes' "I Had Too Much To Dream Last Night" credited to the Space Lady.
The internet being the universal embracer of all things weird and wonderful, it wasn't long before word was spreading and now finally in 2013 we have the first widely available commercial collection of her music available.
Susan Dietrich (that's The Space Lady to you) was apparently a regular sight performing on the streets of San Francisco in the late seventies and eighties, with a particularly strong following in the Haight and Castro communities.
Armed only with a casiotone keyboard with inbuilt drum machine, she tackled popular hits that ranged from "Fly Like An Eagle" to "Puttin' On The Ritz" running them through her own unique filter, and the results are unlike anything that you're likely to hear anywhere else.
Let me also clarify that the Space Lady is in no way a novelty act. While the eccentric elements of her music and costuming would naturally lead one to that conclusion - at least on paper, the recordings on offer here transcend their confined trappings and are something very special indeed.
Dietrich's voice is heavily treated with echo and phaser, giving it an otherworldly beauty that makes even the most familiar of these tunes sound impossibly exotic, and her fragile, crystaline phrasing often brings to mind a psychedelicized Judee Sill.
Originally recorded for a self released 1990 cassette tape (complete with mood enhancing but never distracting analogue hiss), these tracks are deceptively complex interpretations of often quite simple songs, which refuse to be pigeon-holed but would nestle comfortably among the Pram, Silver Apples, Broadcast and Fifty Foot Hose albums in your collection.
Highlights are numerous - I like "Born To Be Wild" with it's mind expanding space pop breakdown, but literally anything plucked from here will make an impression.
And the best news?  Dietrich has returned to making music after a considerable time away.
You can stream the whole album through the Soundcloud widget below (please hit refresh if not visible).