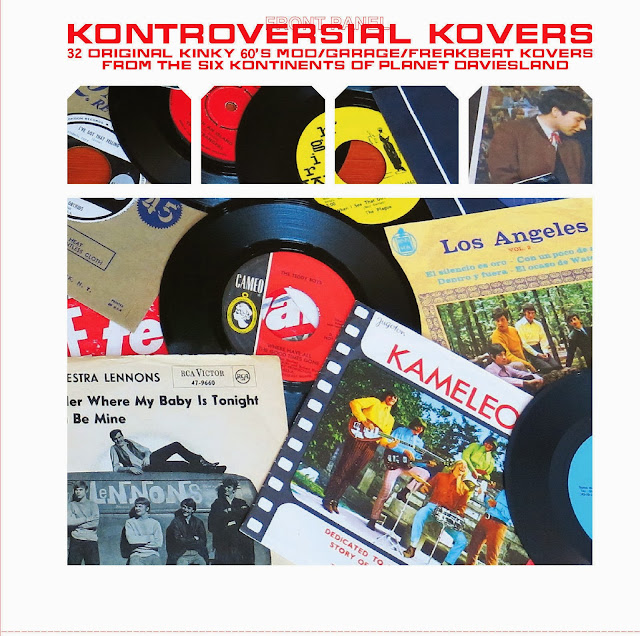 Here's an underground title that deserves a widespread release - I could only find two mentions of it online at all, one an expired eBay option, and another listing for it at Chicago's excellent Permanent Records.
The concept is simple - why not put together a Nuggets style compilation of Kinks covers? Why not indeed. So here we have 32 tracks recorded between 1965 and 1969, all written by Mr Raymond Douglas Davies, and recorded by 32 different bands of the era with varying degrees of obscurity, but a remarkable level of consistency.
Coming from the time period it does, the earlier raw r&b Kinks tunes dominate with only the odd diversion into "Face to Face" and beyond, especially noteworthy in this field being Mexican band Los Angeles (confusing I know) who tackle Waterloo Sunset in their native tongue, putting a strangely exotic spin on a song as British as buttered crumpets.
It's not all obscurities either - the Human Instinct conquer all with their raucous version of "You Really Got Me" with it's ascending backing vocals souding like a rough blueprint for T.Rex's chart conquering glam rock stomp, and Lemmy's first band of note, the Rockin' Vicker's making an appearance with their final single, "Dandy" - although those expecting a louder than anything else Motorhead style rocker will be setting themselves up for disappointment in that department.
Garage jangle is the dominant sound on display here, with plenty of Yardbirds style rave-ups but there's also room for diversions into exotic psych-pop (Los Cincos' "Most Exclusive Residence For Sale") and most impressive of all perhaps, The Blue Orchids lovely girl-group take on "I've Got That Feeling" (actually released before the Kinks version), an unexpected inversion of the Motown girl group covers strewn amongst the Kinks early recordings.
Lovingly remastered over two slabs of red and blue vinyl, this is a thoroughly entertaining diversion that every Kinks or vintage garage fan NEEDS in their collection.