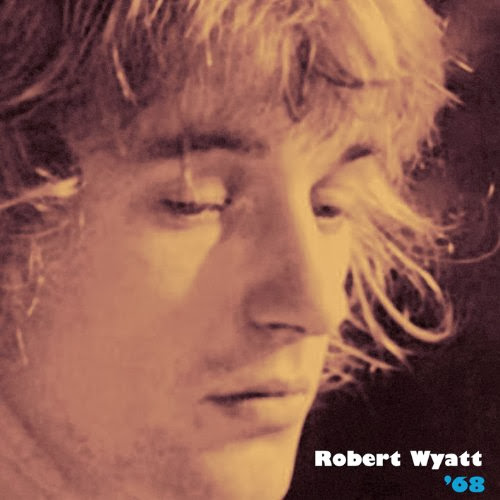 Earlier this fall saw the release of Canterbury prog rock legend Robert Wyatt’s album ’68, a series of demos and previously thought lost recordings he made (mostly) solo in the fall of 1968 in America. This of course occurred after the Soft Machine toured as openers for the Jimi Hendrix Experience and briefly disbanded (re-uniting early in 1969 Kevin Ayers-less). Wyatt spent this alone time getting these songs committed to tape.
As with all archival releases, there tends to be some unpolished portions and a slightly rougher sound, but really, that is part of the charm; albums as such are what keeps the thirst us hardcore fans have for alternate takes and demos satiated. What we have on this album shows just how talented the multi-instrumental Wyatt was. To me, he was the Soft Machine, and upon leaving the group, their subsequent output was spotty at most. In all honesty, one could even argue this change happened around the time of their masterpiece double LP Third, as by 1971’s Fourth, Robert was no longer singing nor composing for the Softs. But that’s a discussion for another time…
Opening up this collection is the organ- centric “Chelsa”, a song that would be developed further a few years later on the first Matching Mole album. This leads to “Rivmic Melodies”, as most would recognize as the basis for side one of Soft Machine’s Volume Two. The first minute or so could actually pass as the final version (I guess Robert played piano on the master as well?), before the “Precise British Alphabet” section deviates into a “meandering British alphabet”, full of free form alphabet reciting over a series of drum patterns and fills. Quintessential Wyatt. From there, he begins singing in mostly broken Spanish as a piano melody re-enters, before returning to more familiar grounds of “Hulloder” and “Dada Was Here”. This builds into some casual, yet frantic, jam territory, before returning to a calmer lyrical coda that winds this piece down. Pay special attention to the thank you message in said lyrics to Jimi and the rest of the Experience for the exposure the Softs received on tour.
Speaking of Mr. Hendrix, he contributes the bass part to the bouncy “Slow Walkin Talk”. It definitely has the feel of something he helped inspire, with a swinging shuffle tempo, and a rather straightforward lyric. Rounding this out is “Moon In June”, which is widely considered Robert’s masterpiece Soft Machine composition. It is already in a finalized form here, albeit much slower, although I almost prefer the barren looseness of this take (note: for the ultimate version, please check out the BBC Radio 67-71 album). Already in place are the stream-of-conscious lyrics and now it all makes sense when he gets to the New York state lyrics (the site of this demo recording). The first section continues its build before reaching an appearance by the full band (Ratledge on organ and Hopper on bass) performing the second section with tight precision for an early take (also, listen closely and you can hear where perhaps the Crimson guys got their inspiration from, or is it just me?), and then crescendos before dropping to the spacy final section.
All in all, a great album, although for those unfamiliar with Wyatt’s work, I am not sure I would make this my starting place. But having this added to his legendary body of work is quite the treat and something for both SM and Wyatt fans to cherish.

Available on CD, Vinyl, or digital.