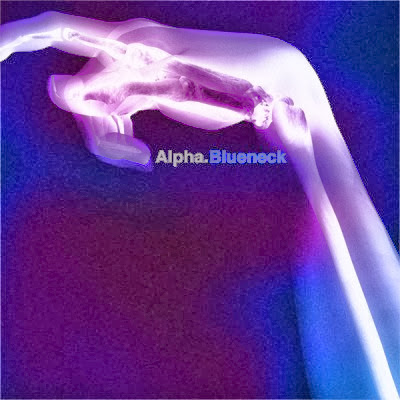 Everyone says “this music sounds cinematic” to the point of uselessness as a descriptor. So I won’t call Alpha.Blueneck cinematic but it would be perfect for the cinema. You know what else? It’s perfect for headphones and large speakers.
Alpha has been part of the electronic community since the 90’s but in all this time they have never sounded so ominous, so intense, so heavy. This isn’t angst we are discussing but there is a weight to the music that makes the listener FEEL that what is happening in their ears is important. In today’s grab and go music environment, putting out a full-length album of remixes and making it feel like a musical statement is rare. Most remix albums are a grab bag of styles and or artists so to have Alpha spend an album remixing one artist is a bold musical statement. It pays off for Alpha. The amazing feat is how much it sounds like an Alpha album of originals.
On to the music then, shall we?
First, here is a little history for those just finding out about Alpha. Alpha were signed to Massive Attack’s imprint on Virgin Records. Come From Heaven was released in 1997 and blew our collective minds by taking the essence of trip-hop and expanding it beyond the basic funk beat with female singer status quo. Alpha became critical darlings but they always stayed more on the psychedelic side of things with spaced-out samples, layers of atmosphere and really accented the trip part of trip hop. While most of the bands from that era disappeared or stagnated, Alpha kept moving branching out to include new singers, new tempos, new effects, dub, but always kept the core of stellar songwriting and performance bolstered by lushly arranged string sections.
Excited yet?
Alpha.Blueneck is the twelfth official release and is starts off with Sawbones. This song ebbs and flows from quiet musings with electronic bleeps that jump to a head-nodding groove and back again. Strings swell, intensity rises, vocals reverb and delay from ear to ear, and then build it up again. Armando is classic Alpha. Picking acoustic guitar, dreamy vibes, slow BPM, buzzsaw synths growling in the background threatening to take over the song but are kept at bay by vintage synth tones holding their own as the vocals mediate as the centerpiece.
Elipse and Le:465 move into glacial territory with slow-motion vocals and piano and then with atmosphere and synths respectively.
The Guest starts again with synths and vocals but then surprises with a big full-band build that Coldplay should probably listen to for inspiration because this is how dramatic music should be done.
Industrial Junk is an instrumental jam with heavy synths and guitars riding a swinging funk beat. HEAVY VIBES but not metal thankfully. Lilitu steps up next and adds in nine minutes of steady build. Revelations continues the focus on guitar and synth steady swelling and holding the groove. Follow that up with Low at just over ten minutes and the guitar amps are now proudly hot with glowing tubes. The Last Refuge calms things down and adds in a mellow Burt Bacharach vibe sans cheese and makes the album a complete listen from start to finish.