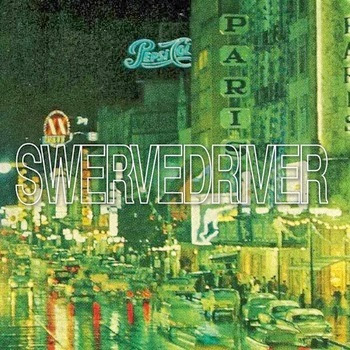 In the Creation Records documentary "Upside Down", someone said "the only shoes they were gazing at were the ones flying past their faces" about Swervedriver.
Swervedriver are the best and clearest example of the wide variety of psychedelic guitar rock emerging in the late '80s and early '90s, which could range from blistering walls of blissed-out noise, to narcoleptic, opiated drone and all points in between - often within the same band, sometimes within the same song.
"Deep Wound", b/w "Dub Wound" is the first new studio output from Swervedriver in 14 years and should reinstate them as the capstone of the heavy psychedelia pyramid. It's built around a descending guitar riff, nearly spot on identical with The Beatles "And your bird can sing," and it occupies a similar powerpop terrain to that song too, if it were to have been recorded in the fog, and then xeroxed.
Swervedriver love hooky, chorusy psychedelic music, recorded through a coliseum of amplifiers, making textural, stylized rock 'n roll. "Deep Wound" is a rager which comes out swinging and never lets up (they were always a pedal to the metal band). It's great to hear them in full-tilt; I greatly adore the spaciousness and moodiness of some of Adam Franklin's delicate solo material like "Toshack Highway", but the man can rock like none other. It's amazing to hear him backed by one of the most pummeling rhythm sections, able to really PUSH IT, to get intense while still blowin' cool.
"Deep Wound" has been around for a while. They played it on Jimmy Fallon in 2012, and are just now releasing it to coincide with a tour in Australia, and a pledge of things to come. Swervedriver are said to be releasing a new album in 2014. It's not precisely a reunion. They've been playing together again since 2008, and Adam Franklin has been intensely prolific since Swervedriver broke up in 1999, with solo material and the Bolts Of Melody. It's more like four people who enjoy each others company, and make good music together. They have a chemistry. People are starting to catch on.
The B-Side "Dub Wound" finds Ride's Mark Gardner (who sings backup on the A-Side) playing The Mad Professor, delivering a weightless, krautrock dub version of the single. It's a really interesting remix; Gardner replaces the driving drums of the original with a motorik machine beat and a simple, pulsing bassline, like tires on a rough asphalt road. He strips the song down to an outline of Adam Franklin's ringing guitar, filling the headspace with stereo effects and panning, against a crystalline backdrop of backwards organ. It sounds like it's floating in the milky way.
One of the main advantages of living in such an information-rich society is we're being given a chance to correct history, to go back and re-appreciate and scour and research. The pop historians, the moldering archivists, the half-mad crate diggers are all doing tremendous work of late, and a good portion of the most interesting new music releases are re-issues and compilations. We can live like those performance artist twins from New York, who chose to live like it was 1900. We can pick whatever era we like and adorn and festoon ourselves with ephemera and authenticity. We are also able to sift out the best stuff and throw the trash away.
In some circumstances these artists are still alive and kicking and making wonderful music, and we get to hear new sounds from old favorite bands. 2013 was a red letter year for new shoegaze treasures: new MBV, new MEDICINE, new SWERVEDRIVER. It's like 1991 all over again only this time let's not get lazy and actually buy the records and go to the shows. It's an encouraging sign that this guitar-centric psychedelia is rearing it's head again as so much of what is in is being made electronically. There hasn't been that much new, interesting guitar music recently. It's important to be reminded of the frenzy of the dancefloor, the sweat, the communism, the high-blooded magick of flying guitar solos and head banging. I'll be a devotee of rock 'n roll for life, even when I'm only listening to rap mixtapes.
Swervedriver point out the limits of labeling and genrefication, which are often attached after the fact. They were way WAY heavier and grungier than most of their ilk but still possessed an air of English romance and pastoralism. There is a sense of the English countryside to their music. They come from Oxford, part of the Thames Valley that contained Reading and produced a significant amount of the most influential shoegaze. But they were also surprisingly American, for a foggy British band. It's all about driving - far and fast. I would credit Neu! "Neu!" as sharing the crowning spot of Best Driving Record Of All Time with Swervedriver's "Mezcalhead" (which i bought on cassette from a Greyhound Station in Washington, D.C.). With Lazerhawk's "Redline" serving as Archduke. It's like they put you in the driver's seat of some powerful machine with the pummeling guitars acting as piston engine, while Adam Franklin's misty vocals breeze by with ethereal electronics rushing by like constellations.
If I were to compare Swervedriver to one better known band for someone who has never heard them, it would be Dinosaur Jr. They have a similar blend of powerful, thick guitars, propulsive drumming and pop vocal harmonies. Their music manages to be both intensely heavy while staying ethereal and trippy- a cross between the Cocteau Twins and The Smashing Pumpkins. Shoegaze was psychedelic music for melancholic souls, for speedfreaks and acidheads, whitehot, dilate pupil rock 'n roll, shot through a vaseline-smeared lens. They draw an essential line between The Cure and The Grateful Dead, and for that I will forever be grateful.