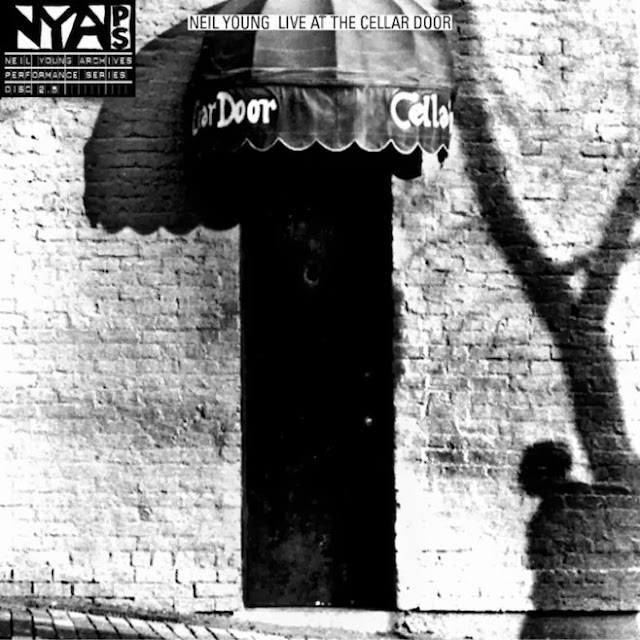 The latest volume of the perpetually in the making (and perpetually delayed) Neil Young Archives Series has been released, and it is quite the chapter in Young’s long and storied career. Labeled as volume 2.5 in the performance series, this was seemingly discovered after the release of the Archives Volume 1 box a few years back, and hence the odd numbering (which allows this to stay chronological, and sit between 1970’s Fillmore and 1971’s Massey Hall shows in the series). As a quick aside, I am coincidentally reading the Young biography Shakey at the moment, and he is quoted as saying that the archives series is meant to show “how scared I was and how great I was[…]show the real picture, not a product. Everything [will be there]- the good, the bad, the ugly…” I find this quite interesting on many levels, particularly as someone who owns everything that has been released so far in the series. Besides the haphazard nature of the archives project, it seems there is censoring happening, what with many key album tracks being left off the main box, and his resistance to release material from the 73-74 ditch trilogy era. That said, this is not to impugn his vision and the nature of this massive project; we should be lucky that anything is coming out, but that quote stuck with me since this set is a compilation rather than one full show, and it seemed poignant to mention here.
Live at the Cellar Door was recorded during a six-show stand at Washington DC’s Cellar Door club between November 30 and December 6, 1970, which would be the first performances after the release of After the Gold Rush. Featuring the live debut of many of the songs on the set list, this series of shows was merely a warm-up for a pair of high profile gigs at Carnegie Hall in New York a few days later. From what I understand, the Cellar Door was a tiny club, and immediately, the listener will gather not only the warm ambiance of the venue, but the intimacy of the performances; it feels like Neil is playing in your home for you. I love the readings of the material here, and right off the bat, prefer “Tell Me Why” to the familiar LP version; the absence of harmony vocals (and key change) actually alters the song for the better. Likewise for “Only Love Can Break Your Heart”, “Old Man” and “Birds.”
Throughout the set, Neil juggles between an acoustic guitar and a piano, the latter on which an interesting rendition of “Cinnamon Girl” is played, although this arrangement would soon be abandoned from his set, probably for the best. “Expecting To Fly”, while choppy at the start, finds its way and Neil manages to bring out the delicate emotion that the symphony somehow subtracts from on the album version. “See the Sky About To Rain” is also notable as it would be another four years before properly recorded for release. “Don’t Let It Bring You Down” has always been my favorite Young song, and this performance does not disappoint in any way. The closing song though might stand as what has kept me coming back to this show. While never the biggest Buffalo Springfield fan, Neil’s contributions to their albums were the high points, but unfortunately, the vocals would typically be sung by others in that group (“Clancy”, “On the Way Home” etc.). With that, getting to hear his voice on this restrained version of “Flying On The Ground is Wrong” (which has an extended introduction here where it is explained that it is a grass song) is beyond rewarding. One wonders if it was merely turned into a more upbeat “pop song” because of the nature of that group and the times, as this solo piano rendition suits it way more, and it would not be out of place on, say Harvest.
Now, I know what you’re thinking- another solo acoustic set? Where does this rank with the others, because not everyone can be a completest..? Good question! Live at Canterbury House ’68 is an inexperienced Young playing mostly Buffalo Springfield cuts and a few new songs from his debut LP, with silly audience banter between; this is his solo beginnings and it shows. Live at Riverboat ’69 picks right up where that leaves off, albeit slightly more polished, drawing from similar material. Massey Hall is Young at his solo peak- a lengthy set list, drawing on four albums plus Springfield material, most of which would subsequently be briefly retired as he went on the Stray Gators and then the Santa Monica Flyers tours in ’73, and then the disastrous CSNY reunion tour in ’74. It is played in front of a greatly enthusiast and appreciative Toronto audience watching their native son, and it is here his confidence shows; Young captivates the audience and is more than just a performer. As awesome as that is, I think Cellar Door gains the edge, due to the intimacy between performer and crowd and the relative freshness of the songs (although I am not a fan of using the best takes from each night- I prefer a full night’s performance, warts and all, as Neil alluded to wanting once upon a time…). Anyhow, let’s hope that the series continues to move forward and more treasures are released, such as this album!

Available here on CD and vinyl.