Wolf People "When The Fire is Dead in the Grate" Review 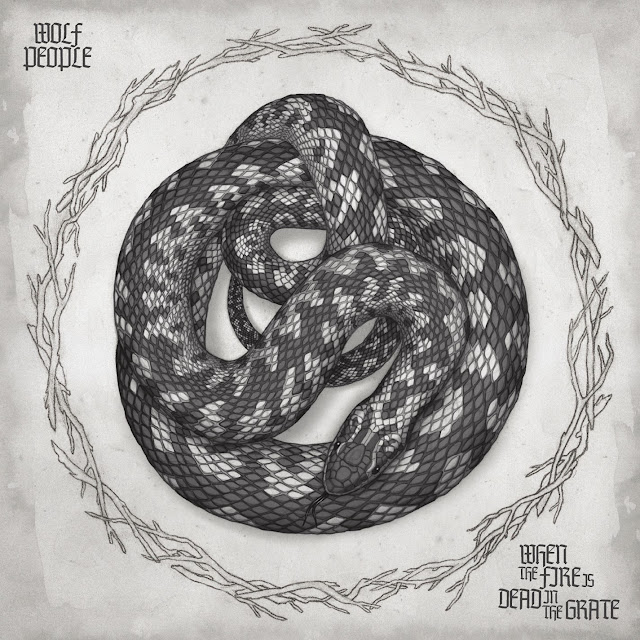 The new EP "When the Fire Is Dead In Grate" from Wolf People comes on the heels of their successful and highly praised 2013 LP "Fain". The EP is named after the song of the same title, which is the opening track here. For those unfamiliar with it, “Grate” is one of the standout songs from Fain; as I noted earlier this year in a review of their live show, it is “a cornucopia full of heavy riffery that had heads bobbing and made this guitarist just want to go home and practice his chops”. A band that loves the quiet/ loud dynamics, this effect is used exquisitely here, with a heavy opening riff followed by gentle guitar strums under softly sung vocals. The real treat though is in the coda, where the band gets into a funky yet propelling groove not unlike something one of their idols Mecki Mark Men might have utilized in their time, with a slithery guitar workout building, leading to a reprise of the intro riff.
The new material here is what the fans will come for, and these aren’t just typical b-sides. In fact, I want to venture the guess that these are completely brand new recordings and not leftovers from the LP sessions, as there is a slight difference in the sound of these recordings (then again, one can do quite the job while mixing). With that in mind, “All Returns Part 2” picks up right where the first one leaves off (try playing them back to back!), as the original’s fade-out fades back up over a loose groove. This quickly picks up in tempo though, as the drums begin to race, and we are treated to a vaguely Dungen-esque portion before coming to an abrupt halt.
The final song, “Become the Ground”, begins as a tender acoustic ballad before changing gears and an electric guitar call and response battle begins. I am particularly fond of this one, in that it reminds me of Wolf People’s first proper LP Steeple, yet in an evolutionary way, which is something all good bands should be striving for. A nifty little EP for both new listeners and their established fan base alike.

You can stream the whole E.P through the Soundcloud embed below - please hit refresh if not visible.