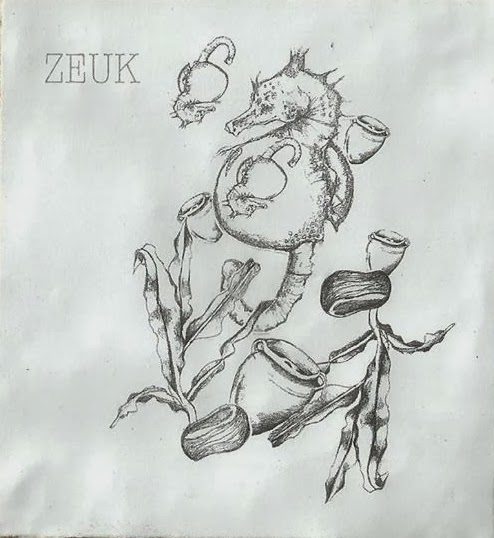 Once in a while an album appears that is as timeless and classic as its influences. Zeuk’s debut is such an album, and it is the work of one man band and troubadour extraordinaire Marc Roberts.
Firmly placing itself amongst the more mystical side of the acid folk scene but also drawing influence from luminaries such as Peter Hammill and Current 93 this is an assured and masterful first outing. Acoustic guitar and bells herald in ‘Fire In The Heart Of The Earth Queen’ which sets Zeuk’s stall in strident and visionary terms, sounding like it could have been recorded at any point from the 1970s onwards and have since been rediscovered as an acid folk classic. ‘Trenchcoat and Tulip’ is more reflective, skipping darkly amongst the flowers with hushed and flanged vocals; a spectre in T Rex’s garden. However this album is no tribute or elaborate reproduction of musics past; Zeuk are a potent creative force in themselves and the confidence and maturity evidenced in this, their first recording, is both spine tinglingly tangible and bodes well for future albums (and let’s hope there are many).
‘Amethyst Bell’ with its delicate guitar lines and anguished vocals reminds this listener of Hammill’s depressive opus ‘Over’ whilst ‘Since’ adds violin and harmonica to its comforting melancholy. There is something deeply heartfelt and yearning about Zeuk’s music, the bittersweet melodies both nostalgic and happy-sad. ‘Song For Freyja (Sorvan Mix) ‘ is epic in its dramatic intent, echoing bells and waves of keyboard adding to the sense of portent and dread. A beautiful yet terrifying version of Oscar Wilde’s ‘The Ballad Of Reading Gaol’ follows. This is not music imagined on a small scale and its emotional pull and sense of drama belies its one man origins ‘Sad Song/Sad At Last’ adds weeping violin to Marc’s impassioned vocals and the result is heartbreaking; in the same vein as Peter Hamill Zeuk ably merge stylised vocals with genuine remorse and feeling. ‘Such Things’ adds a touch of hope to proceedings whilst Vampire is a gothic string drenched macabre terror. ‘Autumn Night’ closes the album with a reflective and forlorn acoustic instrumental piece. The sheer variety of mood and music on display here is impressive in itself yet there is a consistency that comes from Zeuk having their own clearly defined sound and identity, mostly from Marc’s impressive and distinctive vocals.
In a just world Zeuk would be performing this with full orchestra and there would be gatefold sleeves a-plenty. Which bring us to the beautiful packaging that this album comes presented in. Handmade gold flecked paper adorns the cover with an illustration of a seahorse encased in a presentation sleeve. Each copy comes with its own seahorse amulet, further emphasising the special and careful nature taken over this release by Zeuk and their splendid label Reverb Worship. The album itself sounds crystal clear with lovely production and with just the right amount of psychedelic touches and studio glitter to add to Zeuk’s otherworldly mood and unique universe. But don’t delay; this Will O' The Wisp of an album is limited to only 65 handmade copies.
Where did this debut album come from and how does it weave its spell so effortlessly, so fully formed and timeless? That is part of the mystery of Zeuk. Why not attempt to solve this riddle or at least take a swim with the seahorse and enjoy trying.

Available on CD from Reverb Worship.