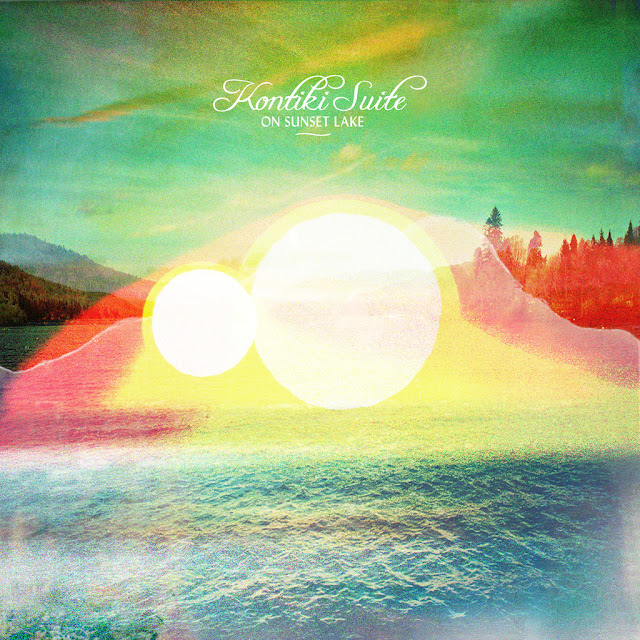 It's a pity we seem to have arrived at a point in our evolution where calling something nice is viewed as damning with faint praise, because if there's one thing that can immediately be said with certainty about Kontiki Suite's new album "On Sunset Lake" is that it is a helluva nice. Not cloyingingly sweet sickly nice mind you, this is full blown Byrds "Ballad of Easy Rider" warming of the heart-cockles nice. The sort of nice that they just don't do any more - except they do, and they have done right here with this slab of infectiously tuneful plastic.
"On Sunset Lake" is a pleasing concoction no mistake - equal parts cosmic Americana, west coast psychedelia, and pastoral Englishness, this is a style we've seen a lot of this year from English bands. Alfa 9 and the See See have already both delivered very fine albums in this idiom in recent memory, but Kontiki Suite have upped the ante considerably on both of them, through a combination of impeccable songwriting and arranging and particularly lush production - potentially the nicest sounding album I've heard this year, including major label releases.
Gems abound, but my favorites are "See You In The Morning" which mixes the twelve string jangle of early Byrds with their more easy-going psychedelic country rock shamblings of the late sixties even better than the Byrds themselves managed and "Hollywood" which sounds like Candidate produced by Jonathan Wilson.
And where a lot of otherwise excellent albums tend to taper off at the end, Kontiki Suite have saved the best for last with "Music Man" a lush piece of canyon rock with subtle mellotron touches, and "Magic Carpet Ride" which is aptly named, feeling just like one with it's hypnotic psychedelic coda.
One of my favorite albums of the year - you'll definitely be hearing a lot more about these guys.

You'll be able to stream and pre-order the album at this Bandcamp link from Friday.

I've been told that a vinyl release is dependent on enough people showing an interest, so if you want this to happen, and presumably if you have ears, you do, leave them a message on facebook to let them know how excited by the prospect you are. They're nice chaps and won't bite.

Check out "Magic Carpet Ride" below :