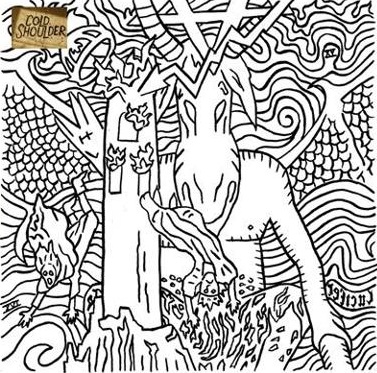 Hailing as I do from a country where a local cover of Black Widow's "Come To The Sabbath" ( by Timberwolf, in case you're interested ) once made a sizeable impact on the singles chart, I find it heartening that in this day and age, band's are still willing and able to release tongue in cheek odes to Satan as singles. For this alone, I salute thee, Cold Shoulder.
Now don't get me wrong. I'm not keeping an eye on your firstborn or anything of the sort, but I've read the odd Dennis Wheatley novel and lets face it - the occult and rock and roll make pretty fine bedfellows.
All of this may lead you to expect the new single "Lucifer" from Cold Shoulder, to be some sort of early seventies occult rock throwback, and as fond as I admittedly am of such things, what we have hear is a much more contemporary sounding offering which rocks considerably and has strong, quirky hooks. "Lucifer" knows how to rock certainly, but also has the good sense to know that it doesn't need to all of the time.
B-Side "The Nights are Cold" on the other hand sounds like an English take on early My Morning Jacket ( before Jim started his apprenticeship with Prince ), and stands favorable comparison to another U.K favorite of mine, Danny & The Champions of the World. Obviously, it's smashing.
As these two tracks are at polar opposites to each other, I'm still none the wiser as to what Cold Shoulder are actually going to sound like in the long run, but I've always liked a good mystery.
Looking forward to hearing more...