This is a new feature on The Active Listener that gives readers a chance to champion albums that they love that are unjustly obscure. If you have an album you're passionate about that no one else seems to have heard of e-mail me at nford150@gmail.com with 100-200 words about it and we'll publish it, unless it's about Nickelback. 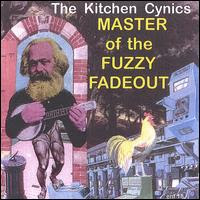 Kitchen Cynics - Master of the Fuzzy Fadeout (Les Enfants Du Paradiddle, 2004)
Of course, it would have been possible to chose nearly any one of Alan Davidson's 50 odd albums - despite his compulsive songwriting disorder, Aberdeen's best kept secret continually surprises fans with endless streams of beautiful gems deserving of a far wider audience. He's the only person I know, who when you email him to see if he's been working on any new material, sends you his three latest albums. He makes Guided by Voices' Robert Pollard seem like a slacker by comparison. Master of the Fuzzy Fadeout earns a special place in my affections because it was one of the first Kitchen Cynics albums I heard and because it starts with a trio of absolutely masterful songs - Rue Bonaparte, his Nick Drake tribute Now's the Time and the poignant Once and Future Love. Throw in Songs of Spring, Chemist Shop Girl and a few well chosen covers and traditional songs, and you have a warm and intimate collection of psych-folk vignettes crying out for a darkened room and a decent set of headphones.