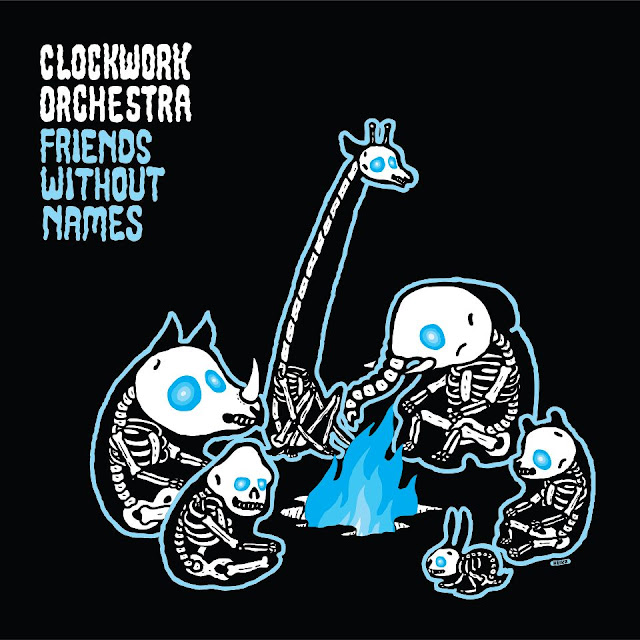 The Clockwork Orchestra may well be the smallest orchestra in the world, comprising just one man. But Irishman Paul Mangan doesn't let that hold him back any on  "Friends Without Names."
Mangan's music is almost uncategorisable - pop would be the word that comes to mind most often, but that doesn't fairly imply the scope and ambition of what he's accomplished here.
Owing a debt to seventies pioneers like Brian Eno and especially Sparks, "Friends Without Names" is a quirky little gem which frequently juxtaposes the silly with the sublime.
Solid pop songs underpin everything that's happening here, but they're dressed in trappings that you wouldn't normally expect - plenty of piano, heaps of eighties synthesziers, synth strings, drum machines, old gaming console power-ups and more.
"The Book That Won't Be Read" kicks things off on a high, a smart pop gem with great vintage synth sounds, psychedelic space rock textures, and a fantastic upbeat bridge with a solo that sounds like it's being coaxed out of a Sega Mastersystem.
"Accident" is the best example of Mangan's range, starting out as an upbeat electro number, it seamlessly mixes in a dark stringladen chorus, a lovely piano based bridge and a marvelous Mellotron section that sounds like it's been lifted from the most English early seventies prog record you've never heard.
That's the secret to "Friends Without Names" success - this could so easily have been an entertaining, but fairly one dimensional album, but Mangan proves to be the perfect judge of what his tunes need.
And he's able to balance out totally infectious pop triumphs like "Zebedebe" with pieces like the sublimely beautiful "Mummer", which sounds like 22nd Century classical music discovered a hundred years early.
And anyone who composes an ode to their own skeleton deserves a few extra points too.
Lots of fun to be had here.

Listen or buy digitally below. CD available November 5, visit The Clockwork Orchestra on facebook here to find out more.