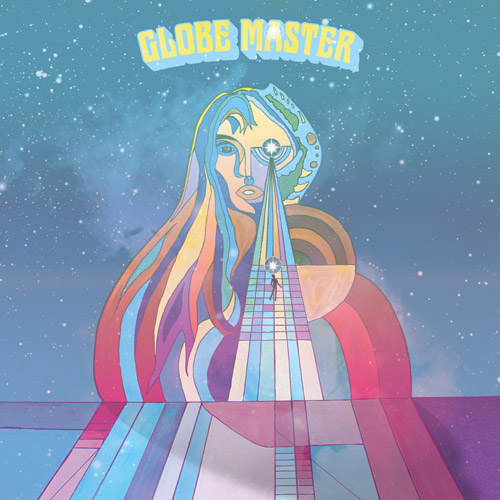 Leisure Birds second LP has a lot going for it.
Apart from sporting a particularly bad-ass cover, "Globe Master" is one of the most hypnotic pieces of space rock I've heard in ages.
It's a concept album, which according to the band's bio "follows the journey of an unknown entity from the outermost dimensions of the galaxy to its eventual fall & transcendence to Earth."
I've loved many concept albums in my time, but it's always the music that's grabbed me rather than the generally preposterous storylines. Fortunately singer Jake Luck's vocals are so drenched in reverb and other treatments to be virtually impossible to understand, thereby eliminating what would presumably be the weakest link. Taken purely aesthetically Luck's pipes do a fine job here especially when winding their way sinuously through the eastern tinged melody of "Egyptian Ring".
The band refer to their trance like psychedelia as "garage sci-fi" - an apt description for a sound that takes in the primitive garage psych of early Black Angels, marrying it to Luck's own vintage keyboard excursions.
Elsewhere tom toms are battered in a way that can only be described as tribal, while the guitars are generally given a harsh, trebly, heavily reverbed treatment in the tradition of the very best garage rock.
They're at their best though when the keyboards take centre stage, as heard on the superior "Silver Runner"-  a spooky synth opus with a cracking pop tune at it's heart, but delve a little deeper and there's a rich seam of Krautrock inspired space rock to be mined here.
Definitely an album that begs for repeat plays.

Buy it directly from the label here.