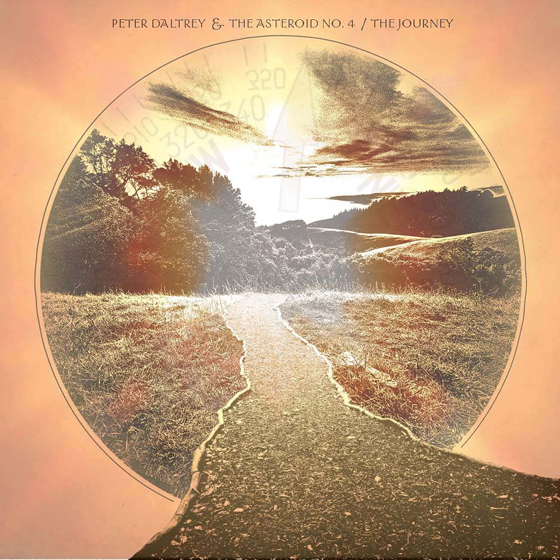 This wee gem was released back in July, but hasn't received the attention that one would expect from such a fine collaboration. With the fine reputation that Asteroid #4 have built for themselves over the last decade, not to mention the ever growing appreciation for Peter Daltrey's former outfit Kaleidoscope, I'm a little puzzled as to how this was out for a month before I even heard of it's existance.
It's the sort of dream project that you expect to reach you by word of mouth as soon as it's announced, but somehow I missed the boat on this one. Fortunately it's never too late to take in good music, and this is very good indeed.
Those that have kept up with Daltrey's solo recordings of the last decade will know that he's still in particularly fine voice, It's matured and deepened but is in much better shape than a lot of his contemporaries - Donovan for instance.
Asteroid #4 provide sympathetic and varied accompaniment throughout, making this a worthy follow up to the Kaleidoscope and Fairfield Parlour albums of yore.
Upbeat tracks like "Wishing Well" combine a pleasing sixties jangle with paisley underground leanings. The eighties psych leanings continue on "Pounding on the Door" which brings back fond memories of a misspent youth discovering albums by the Triffids and Echo & The Bunnymen.
Elsewhere things get much more pastoral, with some nice mellotron work and on "The Hero" and "The Journey" in particular, a continuation of Daltrey's more introspective, spiritual questing first evidenced on the more acoustic tracks from "Faintly Blowing".
Daltrey and the Asteroid #4 boys are ideal foils for each other, leaving me hungry for more of these cross generational collaborations. Now we just need to talk McCartney into doing an album with the Sufis...

"The Journey" is available to stream or buy digitally through the widget below - all proceeds are being put towards a physical release for the album so if you fancy seeing this on CD or vinyl at some point please pay to download a copy - it's worth every cent: