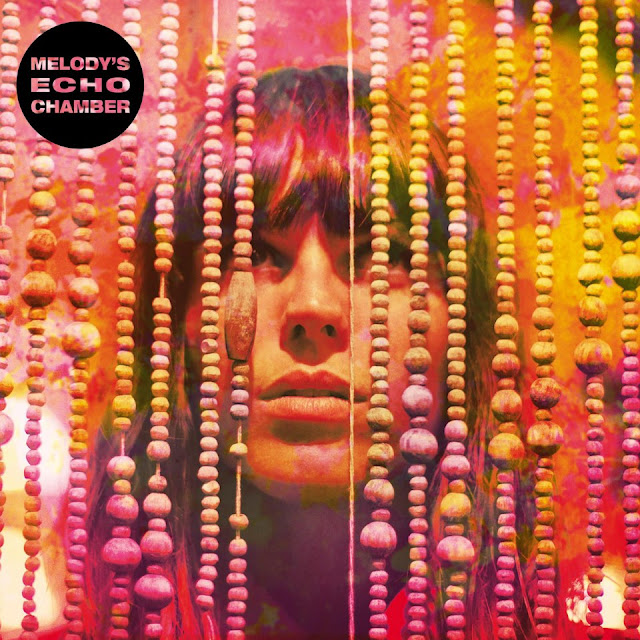 With production work by Kevin Parker from Tame Impala, and frequent comparisons to the much loved Broadcast, there was very little chance that Melody's Echo Chamber wasn't going to make me very very excited.
The Broadcast comparisons are apt although Melody's Echo Chamber has a sound much more heavily rooted in the eighties and nineties, and much less esoteric than the sixties space pop and library stylings of Broadcast. Realistically the constant comparisons are more likely to be conjured by Prochet's voice which does sound a lot like the much missed Trish Keenan's, although in all fairness Prochet does use her voice in different ways too - the soaring vocal hook on "I'll Follow You" for instance.
Kevin Parker's presence is a very welcome one, and while this album didn't remind me a lot of Tame Impala on a first listen, the gap has closed with each subsequent airing with little production touches like the McCartneyesque bass flourishes on "Crystallized" jumping out of the mix and making their presence known.
It's a very busy mix too, with layers of sounds working their way in and out of your awareness, similar in that regard to "Innerspeaker" rather than the more stripped back "Lonerism" - certainly an indication that Parker is ready to handle the production duties on his next album alone, if he so chooses.
Prochet's songs are hooky little numbers with plenty of range - from moody synth numbers like "Mount Hopeless" to full on psychedelic backwards tape trickery in "Is That What You Said?" but it's the overall sound of the album that keeps me coming back for more.
It'd be interesting to hear what these songs sounded like before Parker got involved. Prochet herself admits that she's been hearing this sound for years, but has been unable to capture it until meeting up with Parker.
The appearance is certainly that of a true collaborative effort, and a very addictive one at that.

Available on CD here or on vinyl here.