An Interview With Dodson & Fogg 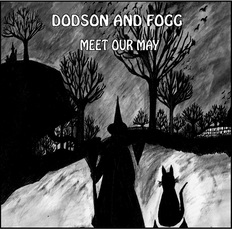 A few days back I reviewed the upcoming debut album (here) from acid folk revivalists Dodson and Fogg.
The gentleman behind said outfit, Chris Wade was kind enough to spare some time for an interview.

THE ACTIVE LISTENER : You're primarily known as a writer ( Of books ). Have you always written songs as well? Is this your first music project ?

CHRIS WADE : I've always written songs, but this is my first proper music project where I feel really proud of the music. I think I was about 6 when I started trying to play instruments, and I use the word trying thoroughly. Ice cream tubs with rubber bands on them occupied me until we got an acoustic guitar, then a drum set and an electric guitar. We were encouraged by my dad who is a great music lover and he told us to stick at it. I remember learning the guitar by playing along to my Black Sabbath records when I was very young. Me and my brother wrote songs when we were very young too, and I spent a lot of time between the ages of about 16 and 19-ish when I still lived at my mum's, just recording all the time on the old 4 track tape machine, trying out ideas, most of which didnt quite work. In 2008 when I was about 23, my brother and sister and I had this three piece punk band which was fun to do and we would do gigs in Leeds. But they kind of lost interest in it, which was OK anyway because I was losing interest in that kind of music as well. Recently, around March this year, I got a couple of my old songs together, re wrote them and also wrote a number of new tracks and started piecing this album together. I've been doing comedy audiobooks, fiction books and non fiction stuff too of the last three or so years, that I enjoyed, but not half as much as I have enjoyed making the Dodson And Fogg album.

THE ACTIVE LISTENER : What are your main influences on the Dodson & Fogg album?

CHRIS WADE : My favourite bands are quite varied really. I always love and still love early Sabbath, just something about that sound gets to me, Iommi's guitar work especially. I used to love the Stranglers but I can't even listen to them these days, save a few tracks. I think you grow out of certain music. But I would say as far as influences for this album go, I listen to Jethro Tull a lot, Cat Stevens, The Kinks, Zappa, Pink Floyd, and I love early Leonard Cohen, and especially Donovan's A Gift From A Flower To A Garden album. All of Donovan's 60s to early 70s output is brilliant. I have to admit I like Amy MacDonald too, her songs are very melancholy and different to anything that comes out now. I'm not sure if the influences have come through on the album, because you just tend to write a song out of the blue by coming up with ideas, but that's the stuff I really love. Also my dad got me into the folk band Trees when I was a kid and for the last few years I've played their two albums all the time. I definitely love the late 60s and early 70s sound, the production, the style, the way everything sounds so different. That was something that i think is clear from the Dodson And Fogg album and people have said it is very late 60s. I also need to mention that Kzrysztof Juskiewicz of the band Skin Alley plays the accordion on one track too. I keep forgetting to put that in because it's only one track, but I also love Skin Alley. Their track Living In Sin is a bloody classic.

THE ACTIVE LISTENER : How did Nik Turner, Celia Humphris and Judy Dyble get involved?

CHRIS WADE: When I was putting down demos, I thought it would be great to have other musicians adding their little touches to the songs. I had already been in touch with Celia because I interviewed her for my online Hound Dawg Magazine in about 2010, and she had also written a foreword for a book of mine that compiled all the best interviews from the magazine. When she got back to me and said she would love to add some vocals I was over the moon. Trees have a fantastic sound and a lot of that is Celia's voice, so hearing her voice on one of my songs, for instance Meet Our May which I originally recorded nearly 10 years ago on my 4 track (although it did sound very different then), was amazing. The same goes with Nik and Judy really, they recorded their parts and sent them back to me, which I then put into the mix. Judy is only on one track but Nik Turner does sound mind blowing stuff on the flute on a few of the tracks. I always loved Hawkwind and knew what a great musician he was, so having him agree to come on board was another thrill.

THE ACTIVE LISTENER : Is Dodson & Fogg strictly a studio project or will there be some live shows coming up?

CHRIS WADE : It's started off as a studio project, but one day I might like to go out and try to do these songs live. I would just have to get a realistic set up I suppose, maybe a little back up band or something. But it would be brilliant.

THE ACTIVE LISTENER : What's next for Dodson & Fogg? 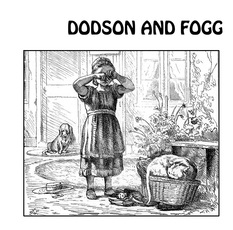 CHRIS WADE : I have already recorded most of the second album, which often sticks to the sound of the first but often goes a bit weirder and further out, and Nik is back on board for definite, as is Celia I think. Plus there's some other people who are probably going to be involved. So I suppose I will just keep doing records as long as it's fun and see where it goes to. So I would love to carry on recording.

THE ACTIVE LISTENER : Is there anything else you'd like to talk about?

CHRIS WADE : I'd like to let people know that the album can be pre ordered on CD from the website: http://wisdomtwinsbooks.weebly.com/dodson-and-fogg.html
But it will be out generally as a download on Amazon and itunes etc. from 1st of November, and also as a CD from the website.
If you fancy it, you can follow me on Facebook: Dodson and Fogg on Facebook.
Also on Twitter for updates: https://twitter.com/dodsonandfogg