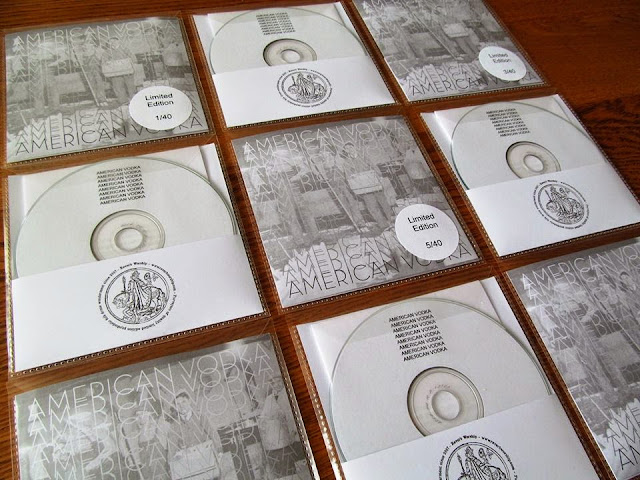 American Vodka were an Austin, Texas band who pursued their own distinctive brand of wistful, reflective and utterly addictive psych rock in the early noughties, the results of which finally see the light of day on the very splendid Reverb Worship label a full ten years after the band's demise. Their moniker speaks of their spiky independent and contrary streak, the notion of American distilled vodka being, as the band put it, 'a veritable oxymoron' at the time. Coming on like a paisley hued Replacements with shades of both Television and The Chameleons this is an unearthed treasure, a lost classic waiting for not just reappraisal but first listen.

'Walking Upright' mixes urgent 'In Between Days' Cure-style guitar with singer SL Telles' melancholic but driven vocals, the song exploding into life with some seriously psyched out riffage; imagine a punkier, Stateside Kinks. 'Violet' is equally as powerful though is hazier, more nostalgic and is carried on waves of flanged and chiming guitars. Heartbreakingly good, it ebbs and flows before crashing into tidal waves of viola, guitar drones and controlled feedback. ‘German Girls' changes the pace, a more hesitant and leftfield piece with corrosive bursts of guitar seeping through the verses, SL's Tom Verlaine-like vocals a perfect foil for the surreal and enigmatic lyrics. 'Falling Water Rising' reminds this listener of ‘New Day Rising’ era Husker Du; it is that good. Make no mistake however, American Vodka may elicit these reference points but they are their own unique proposition; a fascinating mix of new wave, psych, punk and paisley underground. 'Nantucket' is a shimmering, widescreen beauty that coasts on a motorik bassline and some glistening, reverbed guitar. Hugely inventive, American Vodka songs have odd angles and searing noise a plenty but there is also a curious, leftfield loveliness to their material. One can imagine it soundtracking a Hal Hartley film, offbeat but all the while ably tugging at the heartstrings. 'Beaten' is a moody, scorched earth, sinister, Six Organs of Admittance style epic, the calm before the storm of the verses leading into a maelstrom of fuzz and psych freakouts. Carefully layered and paced, the band are masters of dynamics, building and sweeping ever higher and to greater plains of sheer shiver inducing abandon and emotion. The album finishes with a live version of 'Houston', swirling grinding guitar and snarling vocals providing a blitzkrieg ending to a genuinely exciting and emotive release.

A previously hidden gem, this release comes in limited quantities so make haste! American Vodka may be long gone as an entity but this music is alive with possibility, verve and spirit. Raise a glass and seek out this album. Order the CD-R here, with streams and downloads available through the widget below.