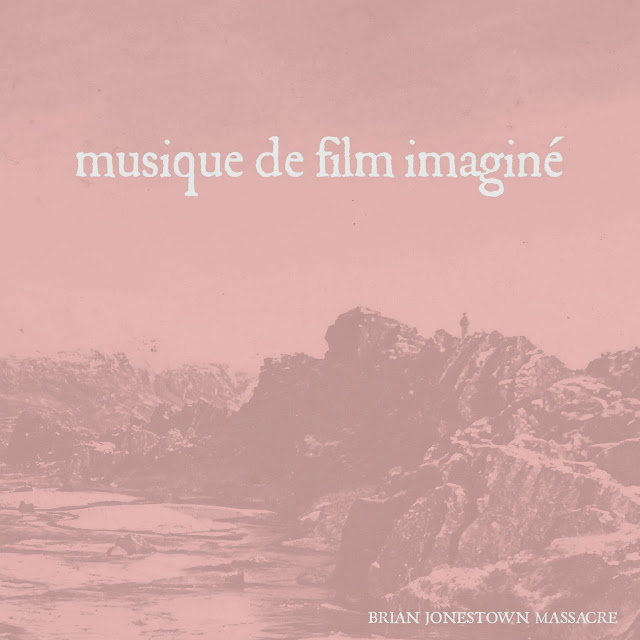 There seems to have been a little criticism of this new Brian Jonestown Massacre release from some quarters, but for those willing to pay even the slightest bit of attention, it's all there in the title. That's right, it's the old "music for an imaginary film" schtick, and those willing to approach this as an entirely different beast to the rest of the BJM catalogue will find some of Anton Newcombe's most dramatic and lyrical melodies awaiting them.

Basically a Newcombe solo release (created on behalf of BJM as phrased on the press release), "Musique de film Imaginé" is a tribute to Parisian cinema of the fifties and sixties, toning down Newcombe's usual psychedelic leanings in favour of moody, sometimes epic prog rock with a tinge of the Gialloesque (not to mention a guest vocal from the daughter of Giallo king, Dario Argento). This also allows Newcombe to throw the conventions of verse/chorus/verse out the window and experiment with repetition and layered counter-melodies. This creates a thematic unity which sounds a little samey on the first few listens, but a little perseverance on the listener's behalf allows these subtle melodies the chance to blossom into things that are often quite wondrous.

Which is not to say that it's perfect; It's occasionally a little too ambient, with several shorter tracks falling a little flat without the benefit of onscreen shenanigans to retain interest, but more often than not "Musique de film Imaginé" is a success, at its best, tapping into the unsettling, sleepy atmosphere of Air's "Virgin Suicides" soundtrack, albeit with a substantially expanded palette. The vocal appearances by Asia Argento and Stéphanie 'Soko" Sokolinski are welcome detours too, but it's on two of the more representative instrumental tracks that Newcombe's star shines brightest here; "L'ennui", which is creepy as hell, with lovely synth bells that recall both "Suspiria" and "Tubular Bells", and "L'enfer", a bracing heavy rock piece, replete with flying cymbals and blasts of mellotron worthy of "Poseidon" era King Crimson.

"Musique de film Imaginé" turns out to be a very worthy experiment from Newcombe, who shows that he's learnt well from some of the masters. Sure, there's nothing particularly groundbreaking going on here, but that's not the point, is it?