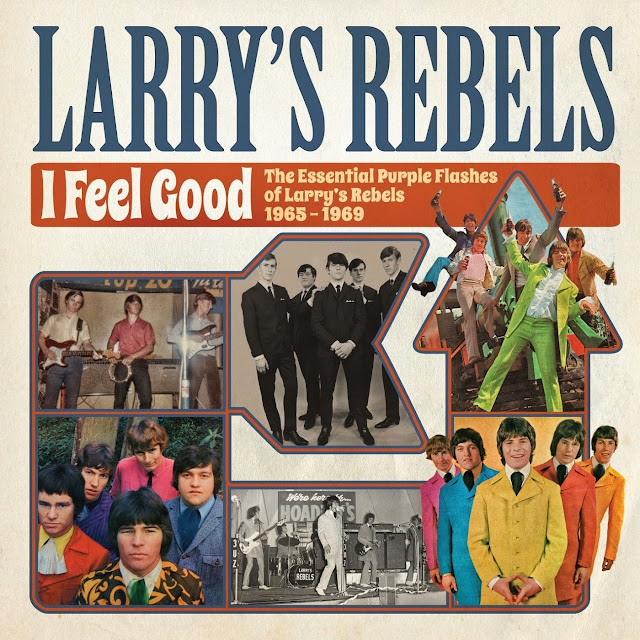 Larry's Rebels were one of New Zealand's most popular bands of the sixties, but this new collection on RPM International is the first chance for most listeners outside the Antipodes to get in on the action.

Common practice in New Zealand at the time was to split your repertoire between covers and originals, relying more on the former than the latter for singles. It was no different for Larry's Rebels who made an early impression with a gritty version of the Who's "It's Not True", before having big hits with the groovy guitar crunch of "I Feel Good" (likely cribbed from the Artwoods), and the Creation's "Painter Man" (which most New Zealanders of the time wouldn't have realised wasn't a Rebels original.

That string of hits will likely give you a pretty good idea of the Larry's Rebels sound - mod pop/rock dripping with delicious sixties flavour, heaps of organ, and some searing guitar work from John Williams. There's little in the way of filler outside of those hits either, with "Let's Think of Something", written for them by Roger Skinner from the Pleazers, trumping all of the previously mentioned singles in this listener's opinion. And then there's "Flying Scotsman"; while Larry's Rebels were on tour as the local act in a New Zealand package tour featuring the Yardbirds, The Walker Brothers and Roy Orbison, Rebels guitarist John Williams would jam at the back of the tour bus with Jimmy Page. One riff that they kept returning eventually found fame as "Train Kept A Rollin", but John used it as the framework for the equally laudable "Flying Scotsman". Yardbirds fans owe it to themselves to check this out.

Decamping to Australia saw the band delving into a more psychedelic sound, as if the tracks titles themselves "Coloured Flowers" didn't give that away. Largely self composed, these sides saw the Rebels really come into their own, without the need for the earlier hodge podge of soul and r&b covers.

"I Feel Good" does a fine job of compiling hard to find early single sides, and selecting the best material from their occasionally patchy output, including a fine selection of tracks from "Madrigal", credited solely to the Rebels, and recorded after Larry decided to go solo. It's an excellent, entertaining chronological journey, with a higher than expected allocation of stand out tracks, and one which does an excellent job of paralleling, and portraying the evolution of many Australasian bands of the sixties. Highly recommended.