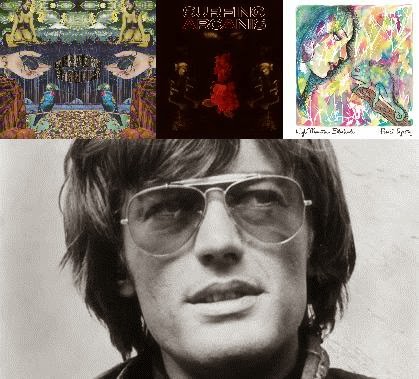 It's been a while since I ran one of these Free Download Roundups, so I've got an excess of exciting freebies to tell you about.

First up this month is one for the Byrd-watchers. San Francisco band Mystery Flavors have a demo single "Land of the King" / "Found It" up on their Bandcamp site as a free download. Far from demo quality, it's a very nicely recorded piece of jangly folk-rock along the lines of the Byrds in their slightlydelic phase. "Land of the King" is particularly impressive; a big catchy chorus, so many electric twelve strings and some nice "Blonde on Blonde" drum-fills to propel it along. Heaps of potential here.

And while we're on the subject of jangly folk-rock, I'd like to point you towards "Blue Byrds Over The Canyon: Southern California’s Folk-Rock UnScene (1965-71)", a carefully curated collection of folk-rock gems put together by Michelle at Lady Plays The Fuzz. There are some familiar faces (The Dovers, The West Coast Pop Art Experimental Band), but plenty of rarities amongst its 25 tracks too, including Peter Fonda's version of "Catch The Wind". This is an ideal primer for those wanting to dig into the genre a little further without paying big bucks for collectable singles and albums - although I'd encourage you to seek out and purchase reissues of anything you hear here that you particularly like of course. Full tracklisting and download link can be found here.

Next up is Chilean surf band Surfing Arcanis, who have a new two track single which has been on endless repeat here. The A-side is an original, which sounds like something from Tarantino's jukebox, with exquisite attention to vintage surf detail, and a spooky bewitching melody. The flip on the other hand is an extremely unlikely, but thoroughly successful reinterpretation of the 1977 French hit "Magic Fly" by Space. If you didn't know the original, you'd swear it had always been a surf song. And while you're at it, check out Surfing Arcanis' amazing surf version of the Doctor Who theme (also a free download!), for more of their excellence, and don't stop there.
"Tenbrosa Silhouetta" / "Magic Fly" is a name your own price / free download here:

Last one for this slot is Italian band High Mountain Bluebirds, who have their second release out, the four track E.P "Floral Tapestry". I've been listening to this one for well over a month, and it's taken its time to grow on me, but has its hooks well in now. It's reverb-laden psychedelia / shoegaze / indie jangle with nu-surf aspirations ala Allah Las. Arrangements are dynamic, building to a dramatic crescendo on opener "You Can See The Light", with a deftness which suggests that no matter how good they are in the studio (and make no mistake, this is very good indeed), their real forte is on stage.
Free download or CD purchase here:

I've got my eye on a bunch of other freebies for you folks, so keep an eye out for another one of these very soon.

Email ThisBlogThis!Share to TwitterShare to FacebookShare to Pinterest
Labels: Downloads