A Year In The Country "In Every Mind" 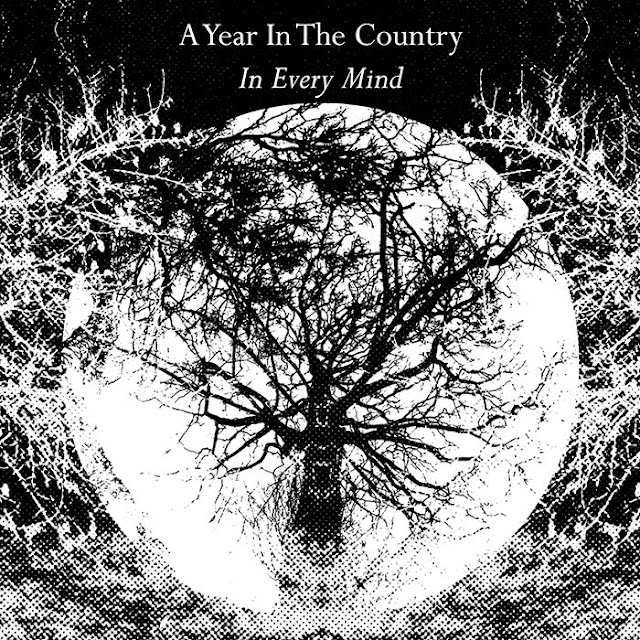 The splendid and consistently fascinating hauntological blog and music imprint A Year In The Country releases their first self-recorded album, following a series of excellent and unique recordings by the likes of Michael Tanner (United Bible Studies), She Rocola and Howlround (all reviewed here at The Active Listener). Described aptly as an 'audiological research and pathways case study' and taking inspiration from the sense that modern day folklore is not so much told around the fire in the heart of the woods but via the television set in the corner of the room, this first outing (there is a series planned) takes its cue from the TV adaptation of Alan Garner's 'The Owl Service'. This show is revered as a folk horror and hauntology blueprint, featuring as it does aspects of the supernatural, of folklore and 1970’s adolescence set in the rustic Welsh countryside. According to A Year In The Country the plan is for these volumes to wander through their own particular journey, pushing aside the brambles and travelling the pathways that they will; to consider the stories of the patterns beneath the plough and the pylons across the land'. Given the level of creativity, of detail and the power and of mood that this first volume achieves, this listener is very much looking forward to wandering those pathways with future endeavours.

The album opens with 'Eternal Strigiformes', a lone stringed instrument (not unlike a dulcimer) picks out an ominous and eerie refrain as looped dialogue is uttered beneath. The notes bend and shapeshift, twisting before slowing to a processionary pace to be joined by the sound of a distant drumbeat. It is at once tense and strange yet also curiously beautiful and emotive. A soundtrack for the walk through the woods at dusk, the ritualistic chiming notes evokes a quiet rural dread. In contrast, the following track 'Escapees' frantic vintage keyboard notes add an urgency and panic, merging with a clipped and repeated female voice stating 'it's time to get up'. Next, 'It Doth Blow's insistent percussion and howling wind hints at something untoward and hidden approaching, flanged analogue keyboards squirming and wriggling below the surface. These come to the fore in synthesised drips and electronic swarms, creating an air of deep unease and tangible drama. If you enjoy the work of Hand Of Stabs, of Coil and of Nurse With Wound's more spectral and unsettling moments (such as Who Can I Turn To Stereo) then this is a must. 'Scrabble and Abrade' drifts on lone piano notes and a distorted choir, as if we have entered a disorientating time slip. It reminds this listener of the atmosphere conjured by the Welsh weird tales author Arthur Machen whose works also revealed a mystical, supernatural hidden world set alongside ours. Otherworldly and off kilter, the track sounds half remembered, the ghost of a faded memory.

Next, 'In Every Mind' is a series of beautiful and heartrending string pieces that echo over the sound of birdsong and the countryside, a collective unconscious carrying tradition and folk belief through the ages. Dialogue from 'The Owl Service' opens 'Tick Tock' as backwards tapes mix together with the sound of clockwork to create a disturbed and yet curiously meditative symphony. Next, 'Light Catching' is both dramatic and intense, pounding percussion and layers of keyboards providing an almost anthemic air; think of the music to 80's children's TV shows such as ‘Chocky’ or ‘The Tripods’ or perhaps the 70s's series 'The Changes'. 'The Journey' begins with sampled walking across gravel, a spooked drone underpinning this ongoing perambulation, the keyboard hum increasing in volume and threat before fading to return once again. 'Perceive' increases the haunted electronica to genuinely (and pleasingly) unsettling levels, synth feedback creating an electric storm over the descending piano notes. Aficionados of The Ghost Box label and the work of The Caretaker will find much to love here, yet this music is very much pursuing its own muse and following its own dark heart. 'The Need to Live's analogue stomp, interwoven with sampled dialogue, is truly thrilling; a synthetic scream into the countryside at night. The pace settles back to a more spectral and wraith like atmosphere with 'Music Box', a repeating melody playing over backwards sounds and strings that you would not wish to hear drifting through the trees when on your own at night. The finale, 'An Idyll', is a gorgeous piece of instrumental and experimental electronica, reminding this listener a little of the works of composer Richard Skelton. The birdsong returns under the melancholic warmth of the refrain, suggesting a conclusion or resolution.

This album is a mood piece made up of several other effective mood pieces and it is utterly successful in evoking a beautiful unease. As a concept it is hugely interesting and evocative; as a piece of music it is immersive and entrancing. I cannot recommend this highly enough. Volume Two is eagerly awaited but until then, night is falling and there is something moving in the trees...

Available now in the handmade and high quality packaging that has become the trademark of A Year In The Country releases. The Night Edition boxset contains the album on all black CDr, a 10 page string bound booklet, a 25mm badge pack and 2 stickers whilst the Dawn Edition features a hand-finished white/black CDr album in a textured, recycled, fold out sleeve with an insert and badge. Click on the buy link below to investigate these options further.