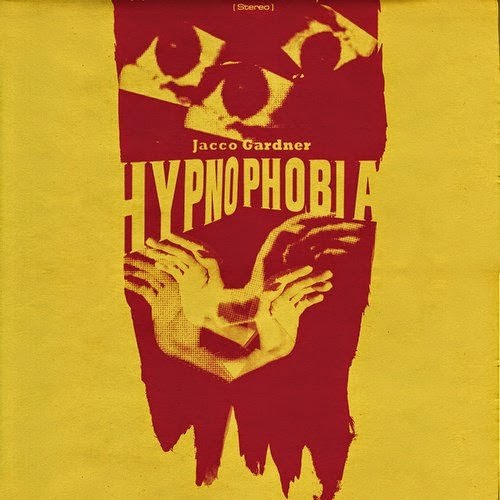 No sophomore slump or 'more of the same' follow up here from Jacco Gardner. His debut "Cabinet Of Curiosities" (on the esteemed Trouble in Mind label) was a kaleidoscopic pop gem, the sort of album which most artists would be more than happy to replicate on a sophomore release, but with "Hypnophobia", Jacco Gardner proves himself to be more ambitious than the majority of his peers.

The striking sleeve art is the work of Julian House, famed for his Broadcast covers, as well as his work for 'hauntology' label Ghost Box. An odd pick for the sort of music that Gardner has previously made, but an ideal choice for the expanded palette on display here.

Let's be clear; Gardner hasn't dropped the Zombies style psychedelic baroque pop angle which earned him so many fans on "Cabinet of Curiosities". What he's done is broaden the field of presentation to incorporate, cinematic, progressive and radiophonic elements, while retaining the ear candy hooks. On the title track there's a Broadcast like approach to hypnotic Radiophonia, which contextualises the choice of sleeve artist and makes a whole lot of sense. Gardner, ever the musical magpie, has no problem integrating these shiny, in vogue references into his songs in a thoroughly natural fashion. "Before the Dawn", similarly borrows from krauty prog rock, and gives it a fresh, melodic spin. And for those worried about style over substance, there are more stripped back songs like "Face to Face", which demonstrate troubadourial tendencies that favourably recall Elliott Smith. Not a real word perhaps, but one that fits the bill here.

Gardner had total control over this record, playing everything but drums, and it shows. There's a cohesion and unity here that's just not possible to create when trying to communicate a vision to a bunch of other musicians, no matter how similarly inclined.

It'll be interesting to see where Jacco goes from here, retreating further into his seemingly limitless imagination, or opening the doors to something more collaborative. It's hard to imagine him bettering "Hypnophobia" with the former approach.

"Hypnophobia" is availabe here on vinyl, and here on CD.