The Karovas Milkshake "In The Shade of the Purple Sun" 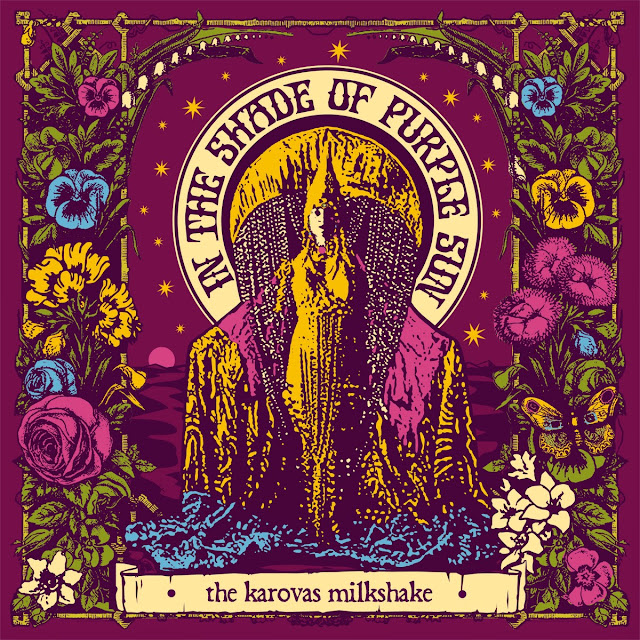 Russian psychedelic revivalists tell the following fable on their website (blame any inconsistencies on Google translate):

"In distant times, Ancient Masters knew the secret recipe of a fizzy cocktail called Le Karovas Milkshake. It was a concoction that made people happier. Alas, that recipe is now long lost. Passing through the mirror of time, a handful of adrenaline mods emerged one day. Come what may, they were determined to resurrect that magic culinary tradition. After they had come together under the ominous name of... The Karovas Milkshake, they went in search of modernity's Holy Grail. Today these performers mix - in equal proportions - brilliant rock songs with drawn-out psychedelia. 'Milky' jams are mixed with marmalade rhythms. A forgotten past comes together with a future present..."

"In The Shade of the Purple Sun" is exactly the sort of fairytale concoction you'd expect to emerge from the same minds as that introduction, with its attractively lurid sleeve hinting further at the delights within, with little in the way of subtlety, but plenty of finesse.

The Karovas Milkshake aren't new to this game - their debut E.P was released in 2010 - and their experience shows with this fine release. It's one for the revivalists who savour vintage production techniques, over new innovations, and approached from this angle, there's plenty to savour here.

An obvious love for vintage U.K psychedelia of the mid to late sixties is used as a starting point, with many other period appropriate appropriations helping to diversify "In The Shade of the Purple Sun" beyond the ambitions of many like-minded artists.

"Purple Sun of Glastonbury" is probably the most overtly psychedelic track here, and almost certainly the best. Led by a Brian Jones worthy sitar riff, and a tribal vocal chant, it exerts a hypnotic charm that could last all day as far as I'm concerned. The backwards guitar section in the middle is an expertly manipulated, "Revolver"esque treat, and the catchy 'ba ba ba' pop outro digs its hooks in irresistibly. So much has happened on the journey from point a to b that it's hard to believe we're still listening to the same song.

The highest recommendation I can give is that picking that particular highlight was not an easy task. There's much more to love here, from the bluesy "Howl" (check out the Robbie Krieger guitars!), to the flawless freakbeat of "When The Night Falls", to the sublimely ridiculous, Syd Barret-on-speed "Apple Pie".

Highly recommended, and available through the Bandcamp link below: