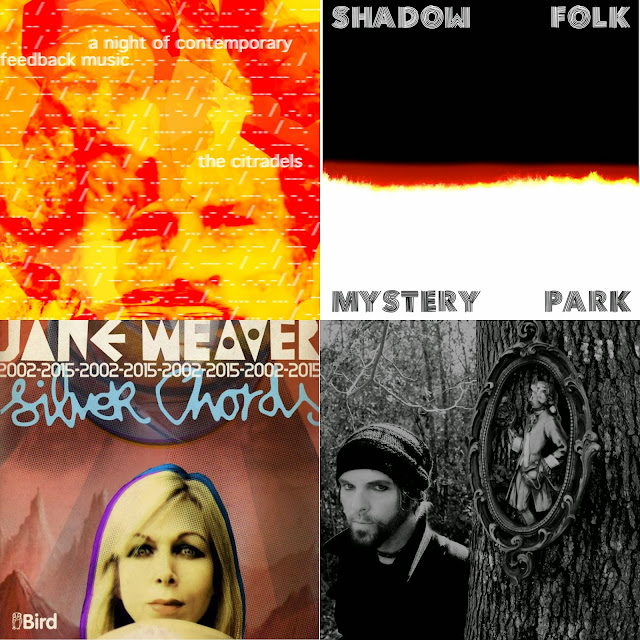 Here's another batch of excellent new releases, offered by the artists behind them as free or name your price downloads.

First is Melbourne band the Citradels, whom we've covered in the past (and featured an interview with recently too).  "A Night of Contemporary Feedback Music" is a step away from this extremely prolific band's usual heavy psych-gaze output, focussing more on acoustic based psychedelia,  including loads of sitar, tabla, mellotron, flutes, harmonium - all the good stuff really. Stripping back the layers of drone and feedback really helps to hammer home the fact that these guys are writing top songs, and the atmosphere here is terrific too. The thematic thread that holds these tracks together is of a poorly executed meditation session gone astray, but a few bad trips aside, it's mostly very melodic, gentle material, with hints of "Rubber Soul" nestled alongside much trippier moments, mostly delivered at their trademark 65bpm. You're definitely gonna need some joss sticks for this one. Quite possibly my favourite of their releases so far.
Free / name your price download here:

Our favourite Canadian psych-poppers Shadow Folk are almost as prolific, and back with another E.P "Mystery Park", on which they continue to diversify their ever expanding palette. This one's a little less cohesive because of the varied nature of its contents, but there's not a weak moment among them. Highlights here include "Red Shirt" which is some sort of bastard offspring of Ray Davies and Mississippi John Hurt, "Chaos" which is decidedly unchaotic, and built around a finger style guitar part which sounds like something that John Lennon brought back from India, and "Harold's Letter", which is a quirky psych-folk gem. And just to show they're still masters of wistful psych-pop, there's the fab "Chopper" too. #embarrassment of riches#

Name your price / free download below - available on cassette too!


Finders Keepers have a treat for us too. For those who have only become aware of Jane Weaver via her most recent (and admittedly most fabulous) album "The Silver Globe", this four track sampler of highlights from her previous releases will be just the trick to make you dig in to her back catalogue, and all it will cost you is your e-mail address. Seemingly compiled to show her at not only her best, but also most diverse, it shows that there's much more in her bag of tricks than the krauty synth pop of "The Silver Globe". Split half and half between spooky, music-box wyrd-folk, and aggressive PJ Harvey style rockers this will do very nicely indeed, thank you. Admittedly "The Silver Globe" was a step to the next level, but these early works are still treasures that other mere mortals would kill to have to their name.
Visit http://www.janeweavermusic.com/ and look for the "Silver Chords" box on the right hand side of the page to download.

And last but certainly not least is a new offering from legendary New Orleans' psych-folk artist Damien Youth, who has a recording history that dates back to the eighties, and is frequently (and deservedly) compared to Donovan, Robyn Hitchcock and Paul Roland. Youth's output has slowed to a trickle these days, making releases like the "The Woodlock Demos" all the more precious. No idea whether these two tracks are a teaser for something else that he's working on, but they're lovely acoustic gems, which sound complete in their fragile, unadorned states.  "Quest to Succumb" in particular, burns with a quiet intensity, which will get right under your skin. Gripping stuff! The master still has his hand in.
Free / name your price download available here: