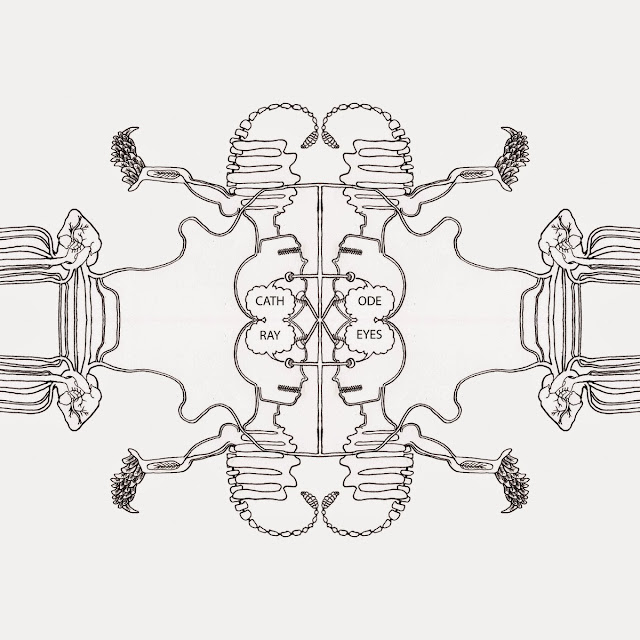 From the always reliable labels Cardinal Fuzz and Captcha Records, the debut LP of Cathode Ray Eyes – solo project of Ryan from The Cult of Dom Keller – drops this June. Like The Cult of Dom Keller, Cathode Ray Eyes plays a brand of psych that is spiked with a healthy dose of gothic sensibilities, but Cathode Ray Eyes take a few turns from that shared source and mark new territories. Here, we’re served a careful balance of acoustic guitar tracks and amp-destroying electric ones. As a whole, "Eyes in the Melancholy Palm" seems much more focused on the space of its arrangements than the structure – as many of the songs take less traditional approaches. There are still fuzzy rock elements, but they take a back seat to many of the slower, ambient tracks that really stitch "Eyes in the Melancholy Palm" together to form a cohesive, impressive debut; it’s wonderfully lo-fi, eclectic, gritty, and at times very strange.

"And the Burial had Several Different Endings" – the auspiciously titled first track (which is available for preview on Cardinal Fuzz’s Bandcamp page, see below) – is an instrumental that sounds like the music you might find in an alien world's cathedral. It’s both baroque and futuristic, combining heavily reverbed guitar plucking with sci-fi sounds and sprawling drums. "Death Song No. 1" comes next and it’s the first time we hear Ryan’s voice. It comes in delayed then speaks from the left. It took several listens to realize this album is aesthetically similar to Slowdive’s "Pygmalion"; both albums seem to yearn for hypnosis through layered and repetitive tracks while filling a room with bouncing but still sparse takes. Cathode Ray Eyes is able to effortlessly mesh straightforward and driving guitar licks with those ethereal layers.

"And It Came (Barrel of Skeletons)" just creeps eerily along, glistening around low in the mix background percussion and ghostly vocals, clearing the palette for the soaring guitars of the following track, "Harry Houdini". Then there’s "Will You Catch Me When I Fall from on High": a sort of folk song with eclectic percussion, ringing guitars and warbling vocals; and all that might almost seem normal save its carefully plotted rests that make it something else entirely.

Available June 1st, "Eyes in the Melancholy Palm" is available for pre-order on Cardinal Fuzz’s web store here. Get it on limited white vinyl or CD. This is an essential item for fans of Ryan’s work, but it also marks the beginning of a very promising project in its own right too. Pick this one up.