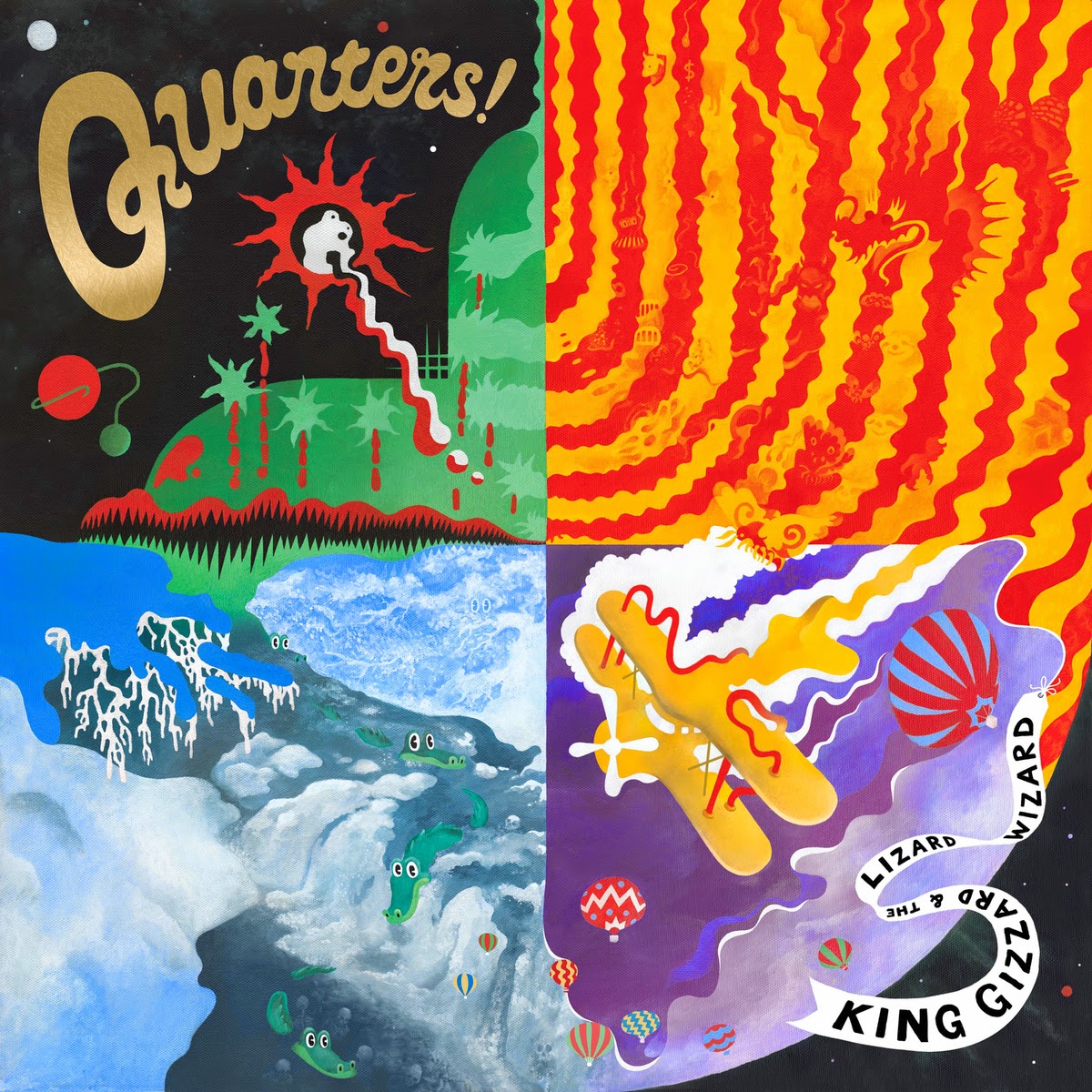 Melbourne's most popular (and prolific) psychedelic exports are back with their sixth studio album, "Quarters!"

First up, a quick look at the track listing intriguingly shows that all 4 songs are exactly 10:10 minutes each... and similar to "I'm in Your Mind Fuzz", which charged along with song after song that bled from one to the other, it appears that King Gizzard have come up with another concept album.

"The River" Is a bit of a casual waltz accompanied by some light washy drums that tap along throughout, and while it does go for a lengthy amount of time it never once becomes tedious. A funk-like strum from a bright guitar sets the pace, and also gives the song a slightly syncopated rhythm. But it's the singer's vocals which roll along in harmony to playful little guitar trills, that also remind me a little of folk inspired prog rock artists like Jethro Tull or early Genesis: with a voice that gently raises in accentuation as the chorus tumbles out in playful iambic pentameter.

This opening track briskly moves forward with purpose and never falls into the trap that many psych epics often do, which usually involves overindulging in unnecessary long solos drowned in pedal effects. Or in the case of some prog rock bands: stumbling upon a newly discovered rhythm and then fixating on it to the point where it sounds like they're just teasing out all the various combinations, through the process of elimination. In that sense, "The River" doesn't feel like the band have just recorded a jam session in the short space between albums. Instead it sounds to me like they've gone into this one with a vision and then meticulously pieced it all together. Even though it still retains the usual feeling of spontaneity (to be expected from the unpredictable King Gizzard), it's the little touches like a gentle bongo roll, or the howl of a harmonica that really give the songs depth and hint that it's all been thoughtfully planned out.

Come track two and King Gizzard return to a familiar spacey-sitar sound reminiscent of the song “Float Along - Fill your Lungs”, as well as a lazy little guitar twang straight from "Eyes like the Sky". As soon as the song begins the listener is slowly lifted up by the rising of a Shepard's tone, and then sprinkled throughout the rest of the track lay little sound effects such as the ringing of a cash register, the crying of a baby, or neighing of a horse. These little inserts could have easily smothered the song by giving it the appearance of being too 'busy', but each is tucked so neatly and carefully, one after the other, that it never gets to the point where it overwhelms, instead working well by adding more character to the song.

Consistent throughout the album is the soft gentle volume at which it is presented. This almost feels like it has been done to lift the singer's intentionally strained voice which whispers indifferent ramblings of cryptic verse. In "God is in the Rhythm" the breakdowns really calm the mood in the style of a 50's slow dance, whereby each instrument is gradually stripped down one at a time to the point t,where he song feels like it's going to fade out and disappear, before the strum of the guitar sweeps back in, and the song returns in full swing.

After having made your way through most of the album and to the last track, King Gizzard finishes "Quarters!" with an audible trip of the psychedelic fare most have come to know them for. Overall this song exudes a Doors like vibe, but it's the guitar effects that remind me very much of Vincent Bell's – Soundtronic with that "watery sound" he managed to squeeze out with his custom-made line of electric sitars, and it just goes to show King Gizzard have an an almost inexhaustible bag of new tricks always at the ready.

In just over a year King Gizzard have now released four full length albums including this one, and it's just now that I've come to realise that each has been a spontaneous attempt to bravely let loose their collective creativity, without feeling the need to cater to any specific sound. The fact that seven members have managed to co-ordinate themselves to produce four totally different and unique albums in such a short space of time is a feat in itself, but to do so, and still come up with something vibrant, yet coherent is even more amazing.

For me the exciting thing about a new King Gizzard album is knowing that another completely different one is likely just a few more months away, since I get the impression that the band is incapable of settling on any one 'sound'. Although this album appears to be quite subdued, it is by no means lacking in any respect. In fact, I think King Gizzard are showing a little bit more maturity and direction with "Quarters!" So if you're after a high energy album, then it's probably best you give this one a miss for now and check out "I'm in Your Mind Fuzz" instead. But if you're looking for something a bit more low key, yet also more involved than your average ambient background music, then "Quarters!" has enough playfulness to keep you interested for a while yet.

Vinyl available here, or download through the Bandcamp link below: