The Apartments "The Evening Visits....And Stays For Years" Expanded Edition 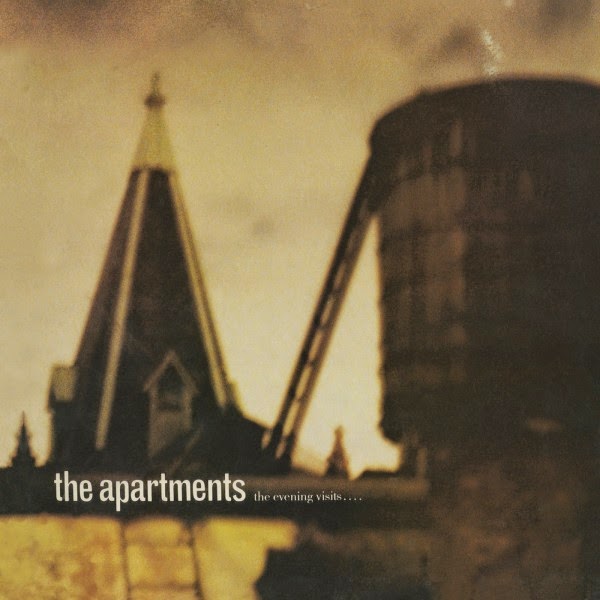 Here's a bit of a treat for those who thought the Go-Betweens had no competition in the 'Antipodean angst transported to London bedsit' department. Captured Tracks Records are continuing on their quest to dig up obscure, phenomenal albums from the eighties with their new reissue of Brisbane band The Apartments' debut album "The Evening Visits....And Stays For Years".

Put simply, it's a classic debut. Reminiscent of the Go Betweens for sure, and there's good reason for it; Peter Milton Walsh, the Apartments' singer/songwriter was briefly a Go Between, before it became apparent that Walsh's personality wouldn't gel well with Robert Forster and Grant McLennan. McLennan: "We're sun, he's rain"

Walsh made enough of an impression to inspire the Go Betweens flipside "Don't Let Him Come Back" with its lyrics of “Here he comes, with his twelve o’clock junk…who’s that dressed in black? Who’s that in his apartment?”, and "The Evening Visits....And Stays For Years" is tonally just what you'd expect given this back story, but the sheer quality of Walsh's material must have made letting him go a hard decision for Forster and McLennan.

Melancholy it certainly is, but it's also extremely approachable and full of lovely, lovely tunes, impeccably arranged. Think mid period Go- Betweens, early Lloyd Cole, and "Born Sandy Devotional" for a ballpark, and quality wise, it's baffling that this isn't universally acknowledged to be a more than deserving peer of all of those timeless touchstones.

These are songs to obsess over, as I suspect Walsh did when writing them. Walsh has a sense of poetry which doesn't normally coexist hand in hand with the level of tunesmithery that you'll find here. That the arrangements are exquisite (jangling guitars, cellos, trumpets) is a very welcome cherry on the top.

Happily, this reissue doesn't end when the original albums does, although if it did, it would still be well worth your adoration. Captured Tracks have doubled its length, collecting fabulous early singles which are much more jangly (one of 'em sounds like a "Boys Don't Cry" rewrite), as well as a string of demo versions of tracks from the album. These are unusually revealing, and a far cry from the normal 'play once' bonus tracks that bulk out the playing time of many reissues, while offering little of lasting interest.

This may well be the reissue of the year as far as I'm concerned. Certainly in terms of giving an obscure talent another chance in the limelight, this is very very important. And the Apartments are still releasing new music, with a new album "No Song, No Spell, No Madrigal" out and about around now. I'll certainly be investigating further.

You can order the CD here, or the LP here. You won't regret it.